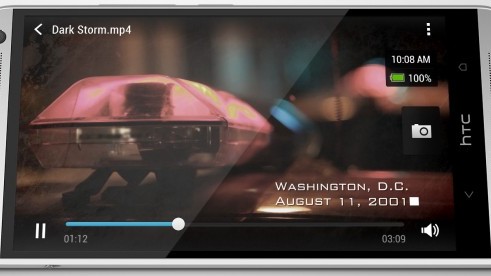 HTC has launched another new member for its One series in the form of the massive HTC One max, which includes a 5.9-inch display and a rear-mounted fingerprint sensor for unlocking the device without a password or PIN number.

The device was announced today and will slot firmly into the company’s premium handset territory despite HTC not providing specific pricing for the handset.

Keeping true to the One series look, it features the same aluminium chassis as the One and One mini, but this time, the rear cover is removable, allowing access to pop in a microSD card.

The expansive 5.9-inch 1080p display offers a PPI rating of 349, meaning visuals should be crisp and sharp.

Other key hardware specs include the same Ultrapixel camera found in the rest of the range, a 1.7GHz quad-core processor and up to 32GB of on-board storage.

The fingerprint scanner is located on the back of the device and can be used to unlock it, as well being customizable to quickly launch certain apps. It has the capacity to store the fingerprint of three separate fingers for launching three different apps.

The launch also introduces Sense 5.5 for the first time, which brings slight tweaks rather than a complete redesign to the custom HTC skin.

A spokesman for the company told TNW that the changes were about making Sense more intuitive to use and gesture-based.

Much of the focus has gone on a refresh of HTC’s BlinkFeed news feed (which the spokesman says 68 percent of owners with it on their handset use it every day) which now supports integration with Google+ and Instagram as well as RSS feeds – a much-requested feature.

The system can now also learn what content is most relevant to you by connecting up to your Facebook account, which HTC says makes it easier for new users to get up and running more quickly with content on their home screen. The update also brings an offline reading mode (you can choose whether you want whole text + images, text only etc.) and multi-edition mode for checking out news in other languages.

Sense 5.5 also brings updates to the HTC Zoe picture mode too, such as allowing ‘Zoes’ to be shared directly to Facebook and other networks rather than having to go via HTC Share firsts as was previously the case. It also introduces a GIF editor and new options for the Highlights reel, such as being able to pick your own music and a removal of the 30 second time limit that had previously applied to Highlight Videos.

The One max will also work with HTC’s recently announced Fetch and Mini+ smartphone accessories. There’s also an optional Power Flip Case (above) that can charge the handset while it is being stowed away, andcan fold over to prop the phone up in landscape mode if you’re watching a movie.

The release follows a recent trend of handsets that straddle the line between smartphones and tablets, sometimes referred to as ‘phablets’. However, with more established phablet ranges, such as Samsung’s Note series or challenger devices from LG, it will need to impress to make a mark on the buying public.