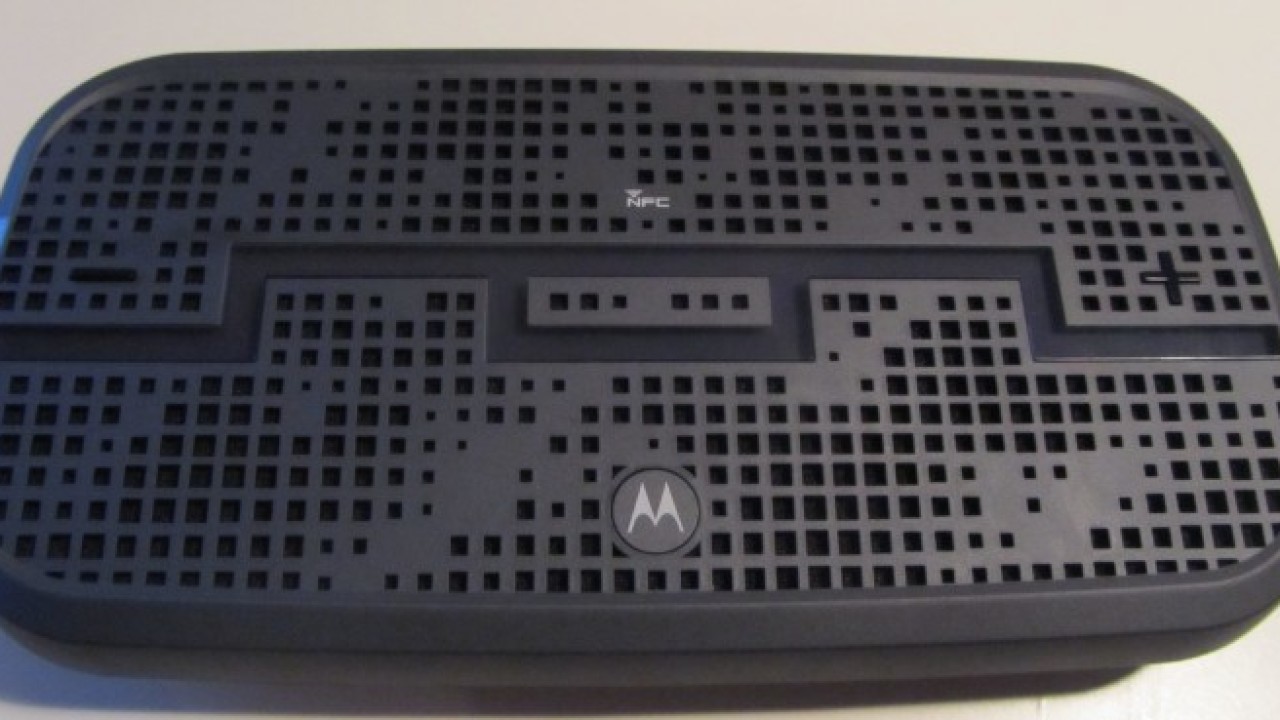 SOL Republic and Motorola’s Bluetooth-enabled DECK speaker was announced in August and goes up against other rivals in the category like the Jawbone Jambox Mini. We went hands-on to see if it could deliver.

Priced at $199, the DECK isn’t the cheapest Bluetooth speaker system on the market, but it hovers around the same sort of price point as the Jambox Mini (at $180) and Bose SoundLink Mini (at just under $200) keeping it within the expected range of premium territory.

In the box, first use

The DECK arrives with a little carrying pouch and 3.5mm-to-3.5mm cable for connecting devices to the speaker the old fashioned way via the headphone socket, but it’s intended to be used over a Bluetooth connection most of the time. The units are available in a range of colors including ‘Gunmetal’, ‘Lemon Lime’, ‘Electro Blue’ and ‘Vivid Red’. The loaner we received was black.

Switching it on for the first time (or indeed, at any time) automatically puts the DECK into Bluetooth pairing mode for a short while. Simply find it via the Bluetooth on your device, or if it has NFC, tap it on the top of the DECK and it will pair in just a few seconds. The process was reassuringly simple and worked first time.

Once connected it does as you’d expect and significantly boosts the output that could be achieved through a phone, tablet or laptop speakers alone.

However, rather than just offering a wireless speaker experience for you, it can be paired in ‘Heist’ mode with up to four more devices, which allows you to take it in turns to choose the music. Bored of your friends’ terrible taste in electro pop? Simply hit play on your device while in Heist mode and your chosen track will start playing.

If it all gets a bit too much, Heist mode is easily locked by pressing the Motorola logo on the top of the DECK, or switched off by using the slider on the rear (shown below).

The DECK can also double as a Bluetooth microphone for taking phone calls too. You answer by simply pressing the Motorola logo while there’s an incoming call.

I like the sleek black unit we received, but the plastic shell won’t be to everyone’s tastes and for a $200 accessory, some people might think the metal casing of the Jawbone Jambox/Jambox Mini provides a more premium feel and experience.

Nonetheless, as I said, I like the plastic casing and rubber base which ensures it doesn’t slip about if you’re using it while on the move, like in a car.

Official measurements of the DECK are 96mm x 185mm x 29mm and it weighs in at 325 grams. In the image above, that’s an HTC One on top of the DECK for rough scale.

In reality, the DECK is easily small enough to throw in a bag or at a stretch, a pocket, to take with you on your travels, allowing for impromptu listening wherever you are.

Considering it has such a slim chassis, the quality of the sound is impressive – clear, plenty loud and crisp.

However, the DECK has clearly been geared towards the mid-range of the spectrum to provide a balanced overall listening experience. Slap on something with an outrageous bassline and you might be left disappointed. That’s not to say it’s bad though, it’ll still be far better than your phone, tablet or laptop can manage.

It boasts a “360-degree Full Sound” speaker too, which are fancy words to say the sound is non-directional and should be just as good wherever you are in relation to the speaker.

If you’re a child (or fan) of the 80s, you might like the way the DECK lights up and talks to you, a bit like KITT from Knight Rider, helpfully keeping you informed of things like when it’s ready to pair with a new device and how much charge there is left in the battery. If you’re not, you could potentially find it a bit irritating.

On the battery point, in my testing, the volume you listen at will significantly effect how long it lasts. Whack it up to maximum and you’re only going to get a few hours listening out of the DECK before it needs to be charged again; listen at an altogether more moderate level and it’ll last twice as long.

As I said before, connecting via Bluetooth presented no problems on a variety of a devices, but one interesting issue did arise. When connecting via the 3.5mm-3.5mm cable to a Toshiba TV, there was no output at all. Plugging headphones into the same socket on the TV worked as you’d expect, but with the DECK there was nothing. I’ve asked the company why this might be, and will let you know if I find out.

With other rivals refreshing their line ups too, the DECK has a harder job at convincing buyers to part with $200 than it otherwise might have had. While its performance brought a smile to my face the first time I switched it on, it also came up a bit short on bass for my taste in some situations.

However, I’m quibbling over details really – the DECK provides an excellent balance between portability and performance, even if the emphasis is on the mid-to-high end of the audio range.  The convenience of not having to manually pair devices to change between which is streaming to the DECK is a nice touch too – as well as enabling the Heist mode. Pleasingly, the DECK also works really well for phone calls, providing clear, loud audio for both parties.

At $200 for a Bluetooth speaker, it’s undeniably a premium-priced accessory. But if you’re considering a Bluetooth speaker in that sort of range, price is unlikely to be the only deciding factor. Nonetheless, with its most notable rival priced at $179, I can’t help but wonder how well the DECK might do if it was priced at $149 instead of $199, that slight price drop could well give it the edge.