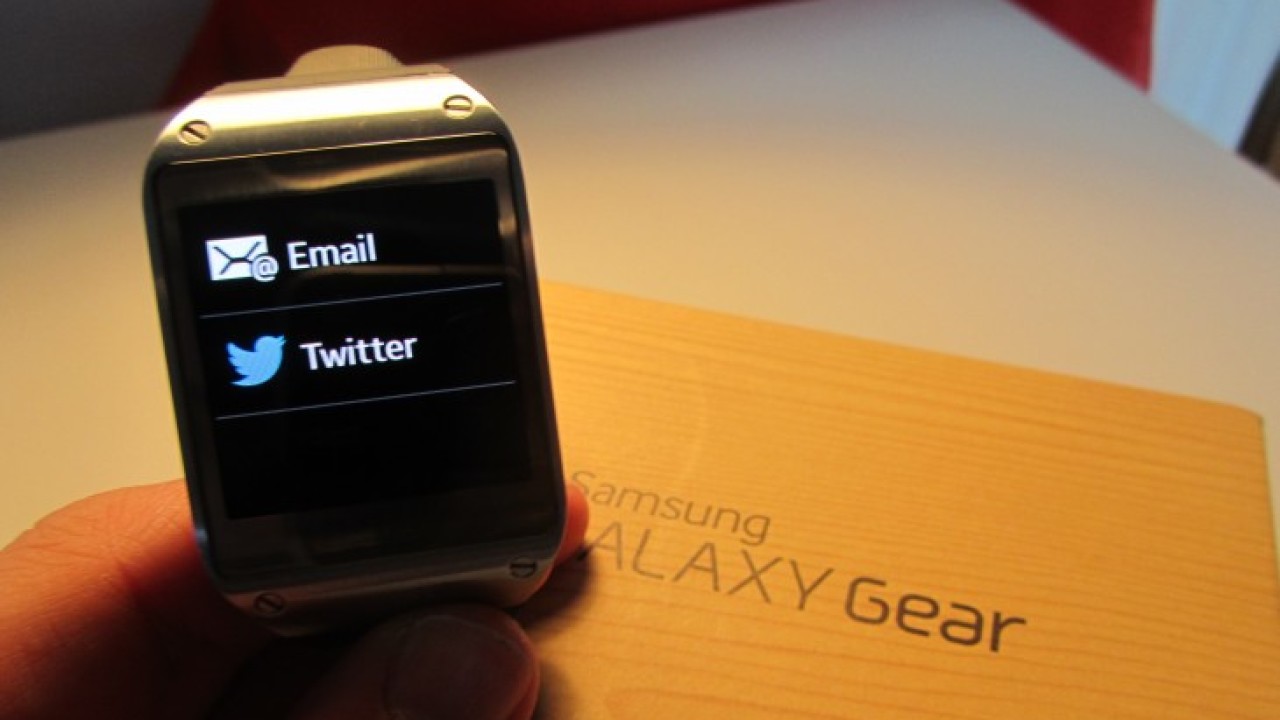 Samsung’s Galaxy Gear smartwatch isn’t the first to hit the market by any means and there are certainly plenty more coming up via the crowdfunding route, but the Gear is one of the first smartwatches we’ve seen from a big name in the mobile market.

As such, expectations for the companion device are pretty high and it will need to impress if Samsung intends to sell large numbers of the Gear at its $299/£299 price tag.

Unboxing the Galaxy Gear, you’ll find a no-nonsense approach: simply the watch, a cradle for charging and a power cable to plug into the cradle. There may also have been some basic instructions for plugging it in and charging it, naturally these were cast aside in excitement of receiving the watch.

The unit I received is black, but the Gear does also come in the choice of gray, orange, beige, gold, and lime green, which is handy if you’re tired of all the consumer electronics in your life being black or white.

While some complaints surfaced about the look of the watch when it was announced, I actually like the Gear’s classic-contemporary design; the classic provided by the brushed steel and exposed screws of the chassis while the overall sleekness gives a contemporary feel to the design.

Admittedly, the plastic strap on such a premium product – it is always just going to be a companion device for your phone – could be a bit of a turn-off. Personally, I think it could be worse, but it doesn’t scream quality.

On the right-hand side of the watch is the only hardware button you’ll find, and this is used for switching the watch on or off, waking the screen or switching between indoor and outdoor modes – designed to make the screen a little easier to read in brighter conditions.

On the under-wrist side of the watch strap is a reassuring metal clasp that also houses microphones and speaker for conducting voice calls. More on that later.

In Use – Navigation & Apps

While we’re on the subject, the Gear will only work with one phone on the market right now – the Galaxy Note 3. This is a major disappointment and a limiting factor in how many people will be interested in picking up a Gear, even though Samsung will eventually roll out support for devices like the Galaxy S4 and Note II.

On board there are pre-loaded apps which include a Media Controller, Camera, Gallery, Pedometer, S Voice, Schedule and Voice Memo, among others. There are also other apps that you can download and install via your Galaxy smartphone, which currently include Pocket, Banjo, Glympse, Path and more.

One of the most obviously useful things about having a Gear is that it allows you to see quick at-a-glance notifications about emails, messages or calls without having to continually pull your phone out of your pocket or bag. However, while in some situations it does all of this, it’s not as straight-forward or fully-featured as it could or should be.

For example, if you set up your handset to receive your Gmail messages through Samsung’s native email client then you’ll get the sender and the content of the emails sent through to your Gear. If however, you refuse to use Samsung’s email client and only use the Gmail app in Android (for example), you’ll only ever be told that you have received an email – but not know who it’s from or what it’s about. Instead, it simply says you need to open it on your phone to see the content. Which somewhat defeats the point.

It’s the same deal for Twitter and Facebook too. It’ll happily pop up the icon and vibrate when you receive a notification, but if you want any actual information you’ll be reaching for your phone. The only consolation is that by pressing the ‘OK’ button (shown below), it does open up automatically rather than having to then navigate to your chosen notification.

Nonetheless, it’s a little disappointing to realise that you’ll still need your phone pretty close to hand for a lot of the functionality.

In Use – Calls & Messaging

Besides acting as a handy notification screen for incoming communications, you can actually take (and indeed, instigate) calls directly from the Gear. Once you’ve selected your chosen contact from the list, you simply need to hold your wrist a little closer to your face as the bottom of the strap acts as the microphone and speakers.  Used indoors in reasonably quiet conditions it’s perfectly easy to carry out a phone call on the Gear; whether you want to, or will enjoy feeling the tiniest bit like a spy (but likely looking the tiniest bit of a tool) is a personal thing. Nonetheless, it’s particularly useful and convenient for short calls.

Take those calls outside however, and it starts to make a lot less sense. Obviously, as there’s no other option, they are all effectively carried out on speaker phone, and I’m just not sure I want to walk down the street broadcasting my conversations – or that whoever I was talking to would be very keen on it either.

As there’s no on-screen keyboard option and all controls are carried out via the touchscreen or voice control, there’s precious little in the way of texting likely to be carried out directly from the Gear. That’s not to say it can’t do it, it can via S Voice, but whether you’ll want to or not is another question. It’s slow to process the commands (via Bluetooth to your device) and often doesn’t understand what you’re trying to text. In every situation I tried it in, it was quicker and easier to just pull out the phone and do it the old fashioned way.

Weirdly, S Voice still doesn’t even support the sending of emails via audio commands, so that’s completely off the table.

Living with the Galaxy Gear

Beyond its second screen skills, the Gear also provides things like a 1.9-megapixel auto-focus camera on the outer edge of the strap. The company says it’s for life-logging fans, but again, it’ll also appeal to people who want to feel like a spy while taking a picture. The same caveat about the potential for looking a bit strange while using the Gear (in this case, while waving your wrist around trying to frame a snap) also applies here.

Nonetheless, strange or not, the camera is very convenient to use for quick snaps when you’re not too bothered about quality. That’s not to say image quality is terrible (there’s a couple of shots below taken using the Gear for a general idea) but it does struggle a bit with contrast and levels if the lighting isn’t good. It’ll also record 720p HD video too. Images and videos are stored on the device but can easily be transferred across to your [connected] phone by hitting the ‘transfer’ button.

Other useful non-communication features on the Gear include the Pedometer and the option to use it in conjunction with S Health on your handset to do things like track the number of steps you’ve taken and log workouts. As with images and videos, this data can then be uploaded to S Health on your phone for a better, more detailed overview and permanent logging towards your goals.

There’s also a Voice Memo option for recording short voice notes and integration with the calendar on Galaxy devices, so you’ll get meeting notifications too.

One thing I don’t really like about the Gear is the plastic charging cradle. Lose this, and you can’t charge your watch, it’s a simple as that. While I appreciate that not including a micro USB port for charging allowed for certain design choices, it’s not fun to think that if that one small piece of plastic is lost, the Gear will be useless.

Battery life itself seems only just borderline acceptable too, and will obviously vary depending on how many calls you carry out using the Gear. As a rough guide, it will charge from empty to full in just under two hours and will last for about a day in frequent use for calls and notifications. Use it a bit less frequently and you’ll get to 36 or 48 hours before it totally gives up. While in-call, it seemed to lose about 1 percent every couple of minutes, but standby usage was far lower. Obviously, you’ll need to add it to your nightly charging regime though if you plan on actually using it and keeping it alive and ticking for the whole of the next day.

However, the most disappointing thing to me in my everyday use is that it’s not waterproof. Taking a shower, washing the dishes – both require taking the watch off your wrist, and both would be times that it would actually be handy to still have on for notifications, or simply knowing the time.

Whether or not the Galaxy Gear is worth the $300 asking price is a tough one to answer. For the things it is billed as, it comes up short in several areas. While call quality itself was fine (and reported as clear on the other end too), it wasn’t the most comfortable way to carry out a long conversation. Similarly, as an always-on second screen on your wrist it gives enough information to stop you reaching for your phone – but only if you’re happy to use the Samsung client. As a watch it’s a bit of a disappointment too – you have to take it off to shower or wash up and if you forget to charge it, you won’t have a watch the next day.

What it does provide is convenience and the option of being able to receive text messages, emails and calls on your wrist – and that’s not to be sniffed at if you’ve left your phone charging in the next room. There’s also a ‘find my phone’ option if you forget exactly which room you’ve left it charging in. While S Voice is hit and miss for sending text messages or instigating calls (particularly in noisy environments), it came in handy on a number of occasion when I needed to quickly add a quick reminder to my calendar or set a countdown timer.

It’s this convenience, combined with things like having a camera always at the ready, that will dictate whether or not the Gear is a worthwhile purchase for you.

However, omitting the ability to send emails and restricting the Gear’s usefulness by having a relatively short battery life will likely limit the adoption of the Gear. Perhaps when more devices are supported and the price falls a little it could find a wider audience, but right now, it feels like a product for early adopters only. Add to this that there are plenty of other (some more fully-featured) choices making their way to market in the coming months and Samsung might well still struggle to convince the market that its Gear is the best option.

Whether or not the Gear will ultimately be a success remains to be seen, but I’m thoroughly convinced that wearable technology is here to stay. For all its failings, I was disappointed every time I had to take the Galaxy Gear off, so having that level of convenience is clearly something you can get used to.