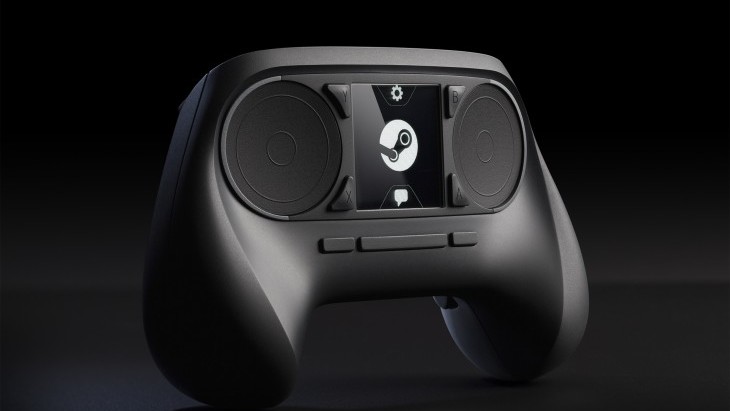 Valve unveiled the Steam Controller today, a unique piece of hardware with dual trackpads for playing video games in the living room.

The Steam Controller features two large, concave trackpads on either side, in addition to four face buttons labeled A, B, X and Y. Both trackpads are clickable, similar to the analog sticks on a PlayStation 3 or Xbox 360 controller, allowing the entire surface to double-up as an extra button. Two shoulder buttons are also located on the back.

Valve says the controller is built with “high-precision input technologies” that focus on low-latency performance; an area that competitive players are always concerned about. Nestled in the controller are dual linear resonant actuators; small, electromagnets which are fitted underneath the trackpads and offer various force and vibration effects.

“It is a higher-bandwidth haptic information channel than exists in any other consumer product that we know of,” Valve said. “As a parlour trick they can even play audio waveforms and function as speakers.”

In the center of the console is a clickable touchscreen that will allow players to navigate the Steam interface with complex gestures without selecting specific menus or options by mistake. Developers will also be able to implement the touchscreen into their games using an API offered by Valve.

The controller is designed to work with all of the games currently playable on Steam, as well as upcoming releases. Valve argues that traditional controllers “force us to accept compromises” and believes that the Steam Controller will vastly improve the accuracy and fidelity of player input.

Earlier this week, the company unveiled a free, Linux-based operating system called SteamOS, which has been optimized to run video games in the living room. Players will be able to install the platform on their existing hardware, or access it with new Steam Machines being built by third-party manufacturers. The Steam Controller announced today will run both on Steam and Steam Machines running Steam OS.

Valve says it’s also designed a high-performance prototype, which many believe to be the long-awaited and highly-anticipated Steam Box.

SteamOS and Steam Machines is a balancing act for Valve, as it tries to open up its hugely successful distribution platform to a larger number of players. Steam Machines, like the upcoming PlayStation 4 and Xbox One, will be designed with ease of use in mind.

Valve says there will be several boxes covering “an array of specifications, price, and performance”, but there’s likely to be a large number of PC enthusiasts who also want the ability to upgrade their hardware at their own speed. That is, after all, how PC gaming stays ahead of traditional consoles built by Sony, Microsoft and Nintendo – at least from a specs standpoint.

A hardware beta has already been detailed, but ultimately players will have to wait until next year before they can spend some of their hard-earned cash on a system running SteamOS.