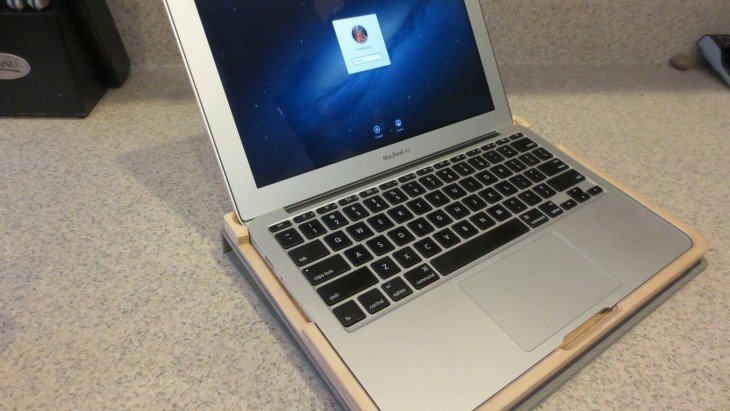 Back in April, I finally had a chance to get my hands onto one of Pad & Quill’s lovely Aria cases for the iPad Mini. I was duly impressed by the construction, and in the months that have followed, the Aria even protected my Mini from a fall onto hardwood from 13 feet. So when the company got in touch to ask me if I’d like to review its Cartella Linen case for the MacBook Air, I jumped at the chance.

The first thing that you’ll notice about the Cartella case is that it’s very similar in form to the Aria, as well as Pad & Quill’s other book-like protective gear. The company has stuck with the same wooden interior of the case, but we’re told that the most recent update holds the Air tighter than previous models. While it definitely adds both size and weight to your svelte Air, it’s not so large as to be cumbersome or intrusive.

I’m a big fan of the way that the Cartella case folds back on itself, boosting the Air to a more comfortable typing position. The only issue that I have is that, because of the wooden frame, it can raise the front of the Air to a less-comfortable position for your wrists. However, when typing with the Air on my lap or on most desks, I’ve not had any issue with ergonomics.

All of the side ports are accessible, and I’ve generally been very happy with how firm my Air has sat inside of the case. While I’m also a big fan of the BookBook from Twelve South, I feel that the improved airflow under the laptop with the Cartella case could be quite useful to those of us who tend to run our little Airs for more intense applications such as photo or video editing. That’s not to fault the BookBook, as it’s been a favorite of mine for quite some time, but it’s definitely a differentiating factor between the two.

Another interesting addition is a document pocket on the cover of the Cartella. While you don’t want to overstuff it with something like a thesis, it’s the perfect size for 4 or 5 sheets of paper that you might have been using for note taking or sketching.

All that said, I do have a couple of issues with the Cartella, but they’re minor. I keep my fingernails very short, and when my Air is closed, it’s difficult to open when inside of the case. Though there’s a detent to allow access to the lid, I feel that Pad & Quill could have perhaps made it a bit deeper to allow for easier opening of the device. I also wish that there was some way to keep the cover attached to the Air, for those times when you perhaps don’t want to have an elevated typing surface. Though that would admittedly not be very often, the option would be welcome.

All said, I think that Pad & Quill once again has produced a winner in the Cartella case. I’m a big fan of the fact that the company is giving you a choice between a leather and linen cover, and the elastic closure still maintains a sense of style for the journal-carrying hipster in all of us. For a mere $79, it’s going to be hard to find a better-constructed case anywhere, and I can almost assure you that you won’t find one that looks this great.