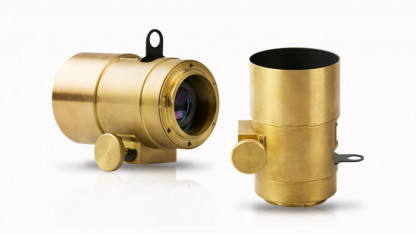 Analog camera and film specialist Lomography is taking its first steps in the digital photography space today with a Kickstarter campaign hoping to fund a new version of the iconic Petzval lens, designed specifically for Canon ED and Nikon F mount cameras.

The stylized piece of glass is a sight to behold, blending the original look and feel of the iconic portrait lens – developed by Joseph Petzval in 1840 – with a smaller, sleeker and contemporary package.

The lens was a popular choice with portrait photographers because of its artistic and dream-like effect on images. The subject at the center of the frame is sharp and in-focus, while the extremities are blurred with a surreal, circular ‘bokeh’ effect.

It’s far removed from almost anything else on the market, but the photos produced by the new Petzval lens are in-keeping with what Lomography has long stood for – warm, creative and unique images that can’t be replicated with a bunch of filters in Adobe Photoshop.

The compatibility with Nikon F and Canon EF mounts ensures that a pretty wide range of photographers with both analog and digital SLR cameras can take advantage of the new piece of glass.

Given that the Petzval lens is now pretty hard to find – it was designed to work with cameras in the 19th century, after all – Lomography’s incarnation is a pretty unique chance to experiment with an older and rougher style of portrait photography.

The analog camera and film firm is looking for $100,000 over the next 30 days to put the lens into full production. The first lenses are expected to be delivered in February 2014, although Lomography says they’re confident the first 1,000 units can be shipped by December this year.

The lens will retail for $499, but there’s an opportunity for the first 100 backers to snatch it up for $300. That figure slowly increases inline with the number of backer slots, eventually hitting $2,000 for a trip to Vienna with one of the first Petzval lenses off the production line.

Lomography has always pioneered analog photography, so to see it produce a lens compatible with digital SLR cameras is surprising. Nevertheless, it’s refreshing to see a company step away from the usual onslaught of high-end black and silver prime lenses and develop something with a little more heart.

Now, can we expect something similar for micro four thirds cameras?