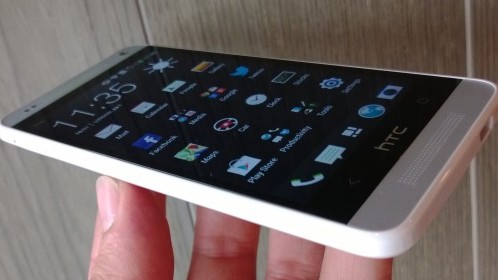 HTC has revealed a follow up to the successful HTC One Android-based smartphone that went on sale earlier in the year called the HTC One Mini, which largely stays true to to the spec and feature list of its larger sibling.

Available in silver or black, it keeps the same ‘zero-gap’ construction and aluminium design of the original, which also means that it retains the HTC Boom Sound speakers on the front of the device.

Obviously, the largest difference is the smaller screen size – reduced from 4.7-inches to 4.3-inches – which has a 720p (which we already knew from leaks) resolution rather than the 1080p of the HTC One.

Other key hardware specs include a dual-core (rather than quad-core like on the HTC One) 1.4GHz processor, the most recent Jelly Bean (4.2.2) version of Android. A spokesman for the company told The Next Web the NFC capabilities of the HTC One had to be dropped for the Mini as they couldn’t fit the chip inside the chassis. It will also play nicely with all the same 3G/4G bands as the HTC One.

While it keeps the same Ultrapixel sensor as its sibling, it actually brings a few updated camera software features, such as being able to select from more themes when creating ‘Highlights’ (automatically created 30 second ‘movies’ of your pictures) and the ability to set them to your own music. HTC said the software would analyze the first 30 seconds of the chosen song and try and match the picture changes of the Highlight reel to the same beat.

HTC said these software options would also be available on HTC One handsets that have been updated to Android 4.2.2.

The handset will initially be offered in the UK and Germany “from August” within Europe, before being gradually rolled out more widely. Pricing is apparently up to the operators to set, according to an HTC spokesman, but he did say it would come in “about two price-points below” the HTC One in terms of operators’ ranges.

Its no secret that since a couple of hit handsets a few years back, HTC has struggled to remain relevant in the smartphone market, but the HTC One seems to have provided a well-timed hit for the company. A spokesman tells us that it is the widest ranged product HTC has ever released and so far has been made available in 181 countries across 583 different operators.