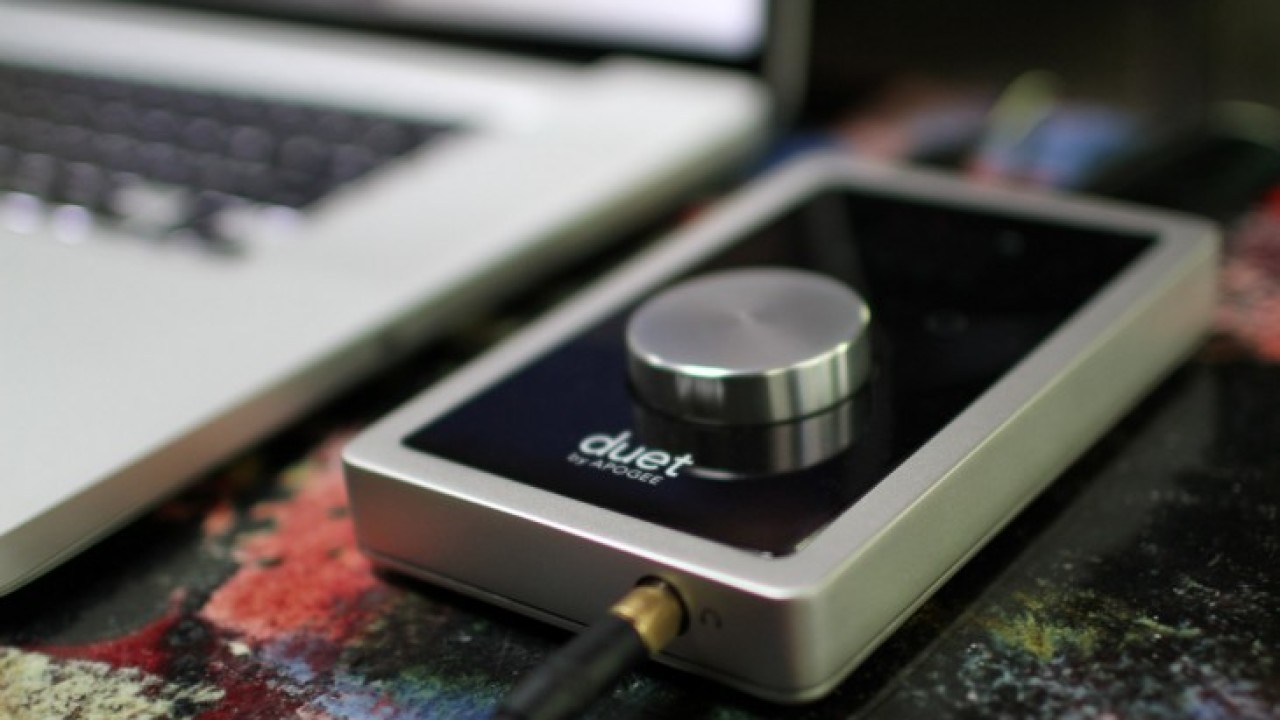 A few weeks ago, I gave a glowing review to the Focusrite Forte, an external sound card for both Windows and OS X that has positively lovely sound quality. I also noted, at the time, that it looked a lot like the Duet for iOS from US-based Apogee Electronics. Apparently that article set off the mention alerts as it didn’t take long for Apogee to get in touch with me and offer the chance to provide a counterpoint to my thoughts on the Forte with either the newest version of the Duet or the larger, 4 in/8 out Quartet.

To clarify, there have been 3 Duets thus far:

Apogee, while flattered by the products such as the Forte and RME’s Babyface (which both take not-so-subtle styling cues from the Duet), believes that there are some important differences which need to be noted. After using the Duet myself for a couple of weeks, and a call with the Apogee folks, I’m inclined to agree. So let’s dig in.

First thing’s first – Even to untrained ears, the Duet will sound fantastic. Apogee got its start in digital music somewhere in the mid-1980s, and the company has deep roots in digital audio production. As such, while the Duet does have some competition in the market, Apogee’s singular focus on digital for almost 25 years has given it a leg up.

The Duet 2 is an external sound card. It can run on bus power, but an AC adapter is provided. We’ll talk more about this later, as it’s important. Its single-knob design was actually unique to the original Duet, so RME and Focusrite simply copied a good design. Another notable difference with the Duet from the Forte, however, is that the input and output abilities of the Duet rely solely on a breakout cable. You can judge for yourself whether this is a positive or negative feature, but I will say that it’s nice to be able to tuck the breakout cable behind  your desk, de-cluttering things somewhat.

But what’s perhaps most interesting about the Duet 2 is that Apogee’s promotion of the product nearly ignores the fact that it’s even compatible with your desktop computer. Instead the company is focusing on another of the Duet’s USPs – the ability to seamlessly interface with your iPad or iPhone.

Yep, I hear what you’re saying, and I’d almost agree — People aren’t doing a lot of recording on the iPad and iPhone. But I will add an important word to that statement: Yet.

That’s precisely the point of Apogee making this inclusion: The way that we work is changing, and that means going mobile. There are amazing tools on the market for every level of audio production, including Apple’s own Garage Band, Traktor DJ for iPad and the 48-channel monster called Auria. The chicken-or-egg problem is already being solved because the software is there. But what good is amazing software without quality input and output to back it up? That’s where the Duet 2 comes in to play.

Plugging up the Duet 2, then loading the Maestro software, you’re able to fully control all input and output options for the Duet from your desktop or iPad. While the single-knob control on the Duet itself will let you access most features, you’ll want and need Maestro to get granular functions at your fingertips.

Now back to that power adapter. Yes, the Duet will run via bus power, so you can plug it up to your iPad then go out and record to your heart’s content…as long as your iPad’s battery is alive, but you’ll need the adapter because the iPad can’t power the Duet. But if you plug in the Duet to AC power, it will charge your iPad while you’re recording. If you want to run it strictly off of bus power, you’ll need to do so while connected to your Mac. But with iOS devices, the direct digital connection of the Duet to your iPad is certified by Apple’s Made for iOS specifications program, and truly does sound spectacular.

This is the other area where the Duet really sets itself apart. While the Forte and Babyface do sound great, there are notable gaps between what they provide and what the Duet 2 can handle. The biggest of these gaps is in the unity gain of the Duet. For those not familiar, unity gain is (in laymen’s terms) what happens when your input and output levels are exactly the same. Most audio interfaces can’t do this on their own, so it requires boosting signals which can lead to degraded audio quality. The Duet, however, features 20 dBu on both the digital to analog and analog to digital interfaces.

The other important area to note is the Duet 2’s headphone output. While I’ve tested and reviewed literally hundreds of pairs of headphones, I prefer to do mastering work with high-impedance headphones such as the beyerdynamic DT 880, which run at 600 ohms. In order to get enough power to make these things produce sound, you often need a dedicated headphone amplifier. I didn’t have a problem with the Duet 2, as its +19 dBu headphone output was sufficiently powerful to create great volume for any project. Oh, and that happens to be a full +10 dBu higher than what the Forte can offer.

In short, the Duet 2 truly is a professional level audio interface. But it’s more than that; it’s somewhat future-proofing yourself. If we’re truly entering the post-PC era, then it’s time that we take our mobile devices seriously as equipment that is completely capable of (and in many cases preferred) producing incredible results that we’ve previously only seen in desktop machines. The Duet 2 makes this possible, and right now it’s the only machine on the market of its caliber.