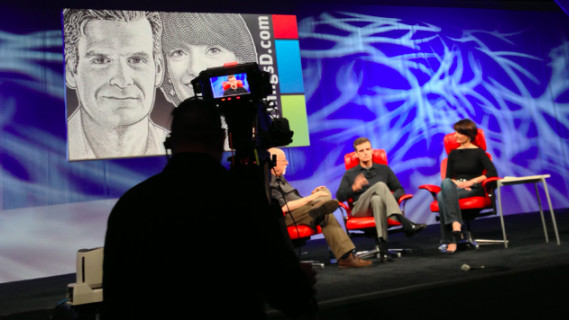 Motorola’s Dennis Woodside and Regina Dugan came out at D11 today to speak about how they’re planning on turning the company around and produce innovative products again.

Woodside teases the next generation of Android devices from Motorola, saying that it’s in his pocket, but he can’t show us.

“We have a hero device that’s coming out that’s going to be called Moto X,” said Woodside, confirming rumors about Motorola’s next big device, which he says will arrive in October.

Woodside says that the phone has sensors that will allow it to be ‘contextually aware’, allowing it to know what you’re doing with it and to automatically set itself up for it. Traveling in a car or shooting a photo were given as examples.

This will also be the first smartphone built in the US. Woodside defined this by stating that components of the phone will come from 12 states, with processors from Taiwan and OLED screens from Korea. Around 70% of the actual assembly happens in the US, says Woodside, in a plant outside of Fort Worth, Texas, in a facility once used by Nokia. The 500,000 sqft. facility will employ 2000 people by August.

Woodside mentioned that there would be other devices that addressed the ‘middle’ of the market between the $30 feature phone and the $650 smartphone. This will not be the Moto X, which is set to be a competitor for the iPhone and Galaxy series devices.

Some other pretty aggressive stuff was shown off by Dugan and Woodside, including electronic tattoos and vitamin pills that turn your body into an authentication token or password that would let you identify yourself to your phone.

“There’s so much information on your smartphone that makes you so much more vulnerable to identity theft now. After 40 years of computing we’re still authenticating the same way,” says Dugan. And even more so now that a power user may authenticate 100 times a day on a smartphone.

The pill, which Dugan (formerly of DARPA) says that it contains a chip that’s powered by the acids in your stomach like an ‘inside out potato battery’. This creates a signal that makes your entire body into an 18-bit trigger.

The electronic tattoo is manufactured by a company called MC10 that Motorola is teaming up with to experiment with. The tattoo has an antenna and a couple of circuits and Google says it wants to create one that would work as a password substitute.

These methods are designed to be more compatible with the soft human shells that we inhabit than the hardware fobs or dongles that many use for secondary authentication.

Neither authentication method will be shipping any time soon, says Woodside. But he offers them as evidence that Motorola is thinking beyond ‘the next phone’ and into the future of both wearable and portable computing.