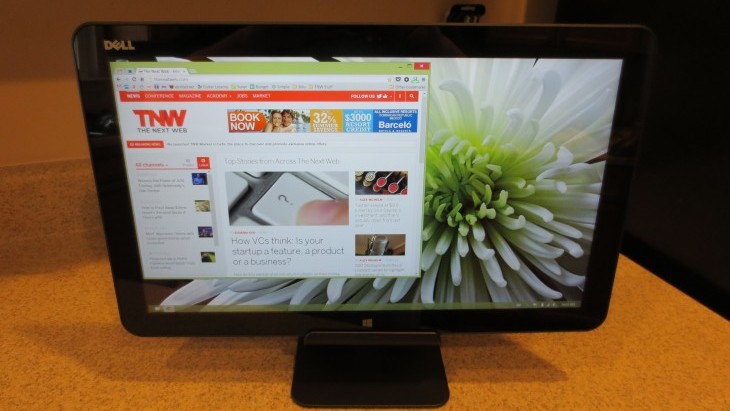 Dell calls its XPS 18 a “portable, all-in-one desktop” machine. You’ll probably call it the biggest tablet that you’ve ever used, but for the first time ever, that’s perhaps not a bad thing. I’ve gotten to spend the past week or so with the XPS 18 and I have to applaud Dell for taking risks and innovating in size to produce a machine that’s become a lot of fun to use.

First thing’s first, let’s chat about specs for just a second. My review model includes a hyper-threaded dual core Intel i5 processor, 8 GB of RAM and a 500 GB SATA hard drive, plus an additional 32 GB mSATA SSD for quick loading. Intel HD 4000 graphics power the 18.4-inch, 1920×1080 display. The machine also includes Bluetooth 4.0, it runs Windows 8 and weighs in at just a touch over 5 pounds.

Now that we’ve got the numbers out of the way, let’s talk about using the XPS 18 in the real world. Chances are that you won’t be carrying around this “tablet” very often, but when you choose to do so you’ll find that it’s surprisingly easy to use while just sitting on the couch or in a chair. Though I still prefer 7 or 8-inch tablets for my handheld computing, the XPS 18 is a novel concept and not without its uses.

When it’s sitting on your desk, it’s easy to forget that you’re using something that you can just pick up and stick into a case. It’s very much a tablet computer, but flipping out the legs on the back takes you to a stand mode where it looks like any other 18-inch monitor on your desktop. My review unit also included a metal stand (a $100 option on the lower-priced models, but included with the i5 and i7 flavors) to raise the XPS 18 from the desktop. The tilt on the stand is fantastic, and magnets allow it to be charged from the stand itself. Not only does this provide a cleaner appearance, it also holds the tablet in a manner that feels a bit more secure than the dual kickstands on the back.

Port options on the XPS 18 are somewhat spartan for a desktop machine, but you’ll probably be okay with them. There are two USB ports on the left side, as well as a headphone/headset port. Dell includes a Bluetooth keyboard and mouse as well, to keep those ports free. The keyboard is lovely, and I believe it’s the same one that Dell includes with the XPS One 27, but the mouse is passable at best.

I honestly expected to hate the XPS 18, and to not see a good use for it. But after playing with it for a few days, I’m well impressed. The challenge for any OEM is to do something that’s different, but ultimately useful. Dell’s risen to that challenge and managed to design a machine that’s plenty capable for both work and entertainment, while still offering the flexibility of using it no matter where you are in the house.

It could readily be argued that a laptop is a better option here, but I think that there’s a lot to be said for the 18.4-inch display. On top of being downright lovely, the touch response is second-to-none. While you’re absolutely going to leave fingerprints all over your computer, it’s worth the trade-off for having a machine that doesn’t require a larger monitor when it’s sitting on your desk.

The XPS 18 is also another machine where Windows 8 starts to make a lot more sense. I’m not going to bring up the debate in this post, because this is a review of a machine and not its OS, but suffice it to say that quickly switching from touch to mouse and keyboard is a lot more friendly on Windows 8 than it could ever be on Windows 7, and the XPS 18 almost begs to be touched. Dell’s not always been known for great-looking computers, but this one most certainly is. 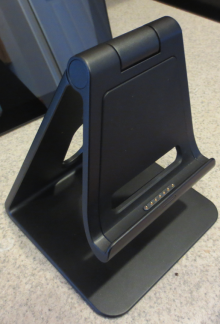 The question at hand is whether this is the bridge that we’re seeing into the “post-PC” generation. It’s not the first machine to take this hybrid approach, but at this point it’s probably the best. The challenge of course is in Dell finding its market. At a $1,349 price tag, the XPS 18 is on par with pricing for an Apple iMac, as well as the Asus Transformer AIO. But there are still advantages to the Dell. You can’t take an iMac with you, and the Asus machine turns into Android when you detach it from its case.

Dell has certainly managed to do something unique, but the question still remains to be answered as to whether or not it’s useful. What I can tell you with absolute certainty is that it’s incredibly thin (for a desktop machine), quite portable, plenty fast for almost anything you’ll do and ultimately a lot of fun to use. Personally, I hope that it’s the first of many hybrid desktop/tablet machines that we see in the future.