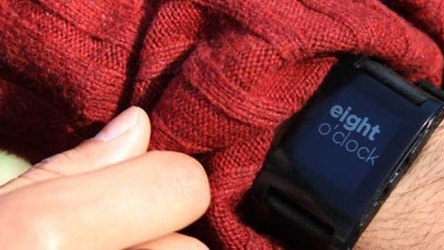 Pebble, the company that successfully funded an e-paper smartwatch on Kickstarter last year, announced today that it has raised a $15 million Series A round of funding from Charles River Ventures.

Pebble says it will use the investment to hire new staff for its software engineering team, expand the open development platform behind the Pebble smartwatch and also ramp up production to meet the growing demand from customers.

To coincide with the announcement, Pebble has also updated the SDK for its smart watch, now called PebbleKit, to enable two-way communication between the hardware and third-party apps. Until now, most apps have been restricted to the watch’s basic functions, but today’s update means that developers can now work on new ‘watchapps’ that both send and receive information from an Android or iOS device.

“Watchapps can now be built to receive weather or traffic information, act as remote controls for a phone or internet-connected device, or display Bitcoin prices,” the company suggested in a press release today.

A quick check on the company’s updated Kickstarter page also hints at the possibility of check-in apps similar to Foursquare and Yelp, as well as multiplayer games and even a Bitcoin price tracker.

It’s not all smooth sailing, however. Developers that want to build apps with two-way communication via an iPhone will need to hand it over to Pebble before it can be uploaded to the App Store.

This is because the company is now part of the ‘Made for iPhone’ program, a requirement for all new hardware that interacts with iOS apps. “We understand that this is a major annoyance. We’ve got a solution in mind for this problem, and it’s on our to-do list,” the company said.

Pebble is also announcing the Pebble Sports API today, which offers deeper integration with third-party sports or fitness tracker apps. RunKeeper, a fitness-tracking app for Android and iOS, announced support for Pebble two weeks ago but the new API should encourage more high-profile sports app developers to join the ecosystem.

In other news, the orange version of the Pebble smartwatch should be shipping to backers next week. Which is always cool.

It’s been rumored that Apple, Microsoft and Google are all working on their own respective smart watch designs. Regardless of what they produce, Pebble will always be known as the first company to produce a working model that the public wanted. The renewed drive for third-party developer support should mean that the hardware continues to evolve over time. The funding from Charles River Ventures is also notable because it’s one of the first Kickstarter projects – aside from OUYA – to attract a significant amount of VC funding. With an extra $15 million in the coffers, it also leaves Pebble to focus on what’s important – getting units to backers and on store shelves.