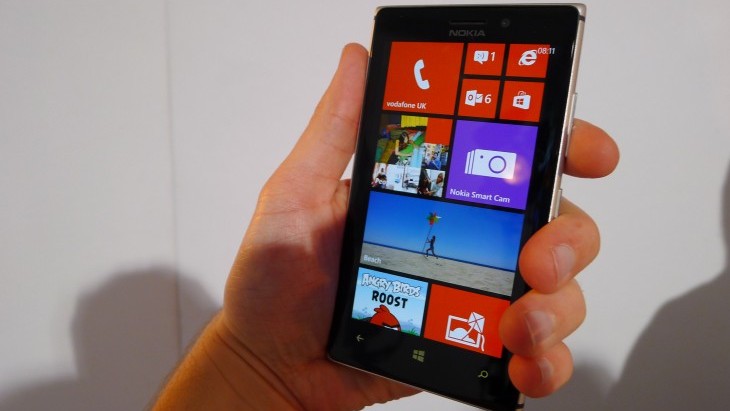 Nokia unveiled its latest high-end smartphone, the Lumia 925, in London today with a brand new look and some unique software additions, such as Nokia Smart Camera and photo-sharing app Oggl.

The most notable difference is the hardware. The Lumia 925 feels much better in the hand than its predecessor, the Lumia 920, due to its slimmer profile and an overall reduction in weight. Contrary to prior speculation, the Lumia 925 is a combination of both plastic and metal materials. There’s a a polycarbonate insert on the back, surrounded by an aluminium frame that wraps subtlety around the sides of the device. The front is all display though, which results in an interesting mixture of both luxury and durability throughout the device.

Nokia enthusiasts who have fallen for the bright, CMYK color scheme of the previous Lumia and Asha devices might come away feeling disappointed by this design approach. Instead, the Finnish manufacturer has chosen to target the premium finish and industrial design enjoyed by both the iPhone 5 and HTC One, which will likely be commended by even the company’s harshest critics.

The hardware isn’t industry-leading by any means – it offers a 1.5GHz dual-core processor, 1GB of RAM and 16GB of internal storage out of the box. The 4.5-inch AMOLED display looks particularly impressive, however, and the 8.7-megapixel camera should provide exceptional low-light performance.

Combined with Nokia’s usual array of exclusive apps, such as Nokia City Lens, Nokia Music and Nokia HERE Transit, the Lumia 925 still takes the crown as the best Windows Phone 8 device on the market. No-one else is even close on the Windows Phone 8 platform, aside from the Lumia 928 announced exclusively for Verizon last week.

TNW had the opportunity to go hands-on with the device ahead of its initial launch in June, and have uploaded a plethora of images below to give you a better idea of the Lumia 925’s new polished hardware aesthetics.

The Lumia 925 will be available only in grey and black to begin with, although consumers can purchase an optional sleeve in either red, yellow, black, and white. It’s not just a cosmetic change though; the sleeve also supports wireless charging, in conjunction with compatible accessories such as the Nokia Wireless Charging Pillow by Fatboy.

The smartphone also comes equipped with the aforementioned Nokia Smart Camera app, which can take a burst of up to 10 photographs to help users choose the best shot. It’s worth noting that the files are restricted to 5-megapixels, however, to help the device conserve space and make the most of its dual-core processor. Combines with motion blur options and the option to remove certain parts of the photo, it seems like another neat addition to Nokia’s growing suite of apps.