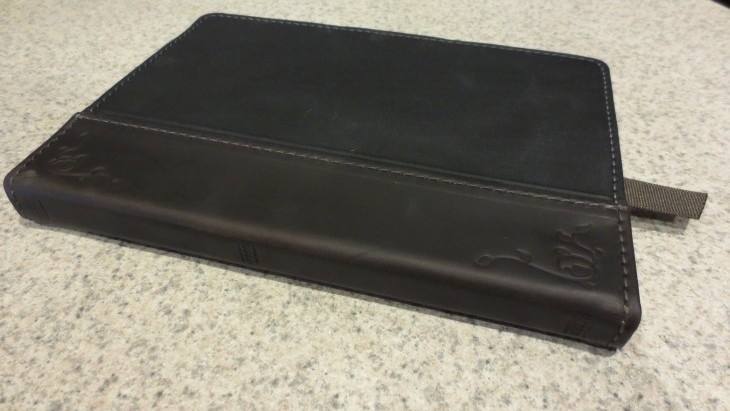 As much of a slim and sexy factor as my new iPad Mini has, toting around a $500 device without some form of protection just doesn’t seem like a smart idea. While I’m careful myself, I have two kids, a hyperactive dog and an accident-prone wife. While there is no shortage of great cases available, Pad & Quill’s Aria for iPad Mini is an $89 masterpiece of craftsmanship, so it’s time for our review.

You’d be forgiven for quickly making the comparison between the Aria and the BookBook from perennial TNW favorite Twelve South. The leather-bound, book-inspired design brings both cases in parity with one another. Further, Twelve South has made quite the name for itself via exquisite craftsmanship as well. But generalities aside, the specifics of the Aria most definitely differentiate it from the competitors.

Opening the Aria, you’ll notice that your iPad sits inside of a custom wooden frame. The corners of this frame contain small pieces of a rubber-like material, which serve to hold your device in place. While I’m a fan of the fully-enclosed interior of the BookBook, the Aria’s design works well and I’ve never felt as if my device was in any danger of falling.

The Aria, like all of Pad & Quill’s iPad cases. has a bookmark-esque piece of ribbon which runs under your device, allowing you the leverage that you’ll need in order to remove it from the case. Doing so is no easy task, and will likely wear down the rubberized inserts, but there are replacements included with the case.

The Aria is the only one of PQ’s iPad Mini cases that offers a dedicated method for creating a stand. Akin to many others on the market, a tab on the back lifts slightly, allowing you to insert the folded-over front cover. I’m slightly concerned that, after years of use, this tab may find itself permanently raised from the surface of the case, but the leather is dense enough that it shouldn’t be an issue for quite some time to come.

That same density of materials also means that, for the first few weeks, you’ll be in a break-in period with your Aria case. Folding the cover back onto itself, for instance, will not make it sit completely flush with the back until the leather has had some time to soften. The same can be said for setting up the Aria in its triangular-stand shape. The leather, especially on the binding, will take some wear time before it will sit perfectly.

That’s not to say that I’ve been unable to use the case in its intended fashion. I simply took a couple of minutes to manipulate the leather before notching the front cover into the rear slot and my iPad stood just fine. While it did not sit flush, I have no doubt that it will after some weeks of use. It’s a small trade-off to accept, given that we’re talking about a case that will likely be around for a lot longer than your iPad.

As you can see in the pictures, while most of the notches for the case are cut out exactly where they’re needed, the one for the power button doesn’t line up perfectly. While understandable (as doing so would have meant less protection for the corner of the case) it’s still a bit odd. Fortunately, because the Aria supports sleep and wake functions with the closing and opening of the cover, there’s no cause for concern.

Despite the rather large, wooden frame, the Aria still manages to stay lightweight. In fact, its overall size is slightly smaller than that of the BookBook; a surprising fact when you consider the framing and thickness of the leather in which it is bound.

If I had to name any gripes about the Aria, (and believe me, I’m stretching here) it would be in two design choices. An elastic band holds the Aria’s cover closed, and I worry that over time it might lose its spring. I’ve seen this happen with journals and other styles of books after a couple of years of use, so it’s natural to think that it’s possible with the Aria.

My second concern, though it’s honestly just more of a comparison, is that I believe the BookBook is probably the more protective of the two cases. Given the full, internal sleeve of the BookBook, plus the zipper to hold everything in place, it feels like it’s offering more insurance than the Aria. That’s not to say that the Aria isn’t protective, but again it’s just a comparison between two cases that will likely go head-to-head in a buying decision.

There’s no denying the quality of Pad & Quill cases. Everything in the iPad Mini line is done with the utmost of care and attention to detail and the Aria is no exception. Simply sliding your iPad into place, then looking at it from the side view will show you how much time and exacting measurements have gone into the manufacturing of these beautiful, protective covers.

With a cost of $89, the Aria is priced in line with other ultra-premium cases. If you want a slightly less pricey option, you can opt for the screen-printed Graduate case, or the book-styled Octavo case. Either of these will save you $20. A drop down to $59 gets you the cloth-covered, hardbound Graduate case. Whichever you choose, the same attention to detail is still present. But if luxury is what you’re searching for, then the Aria should be at the top of your case-buying list.