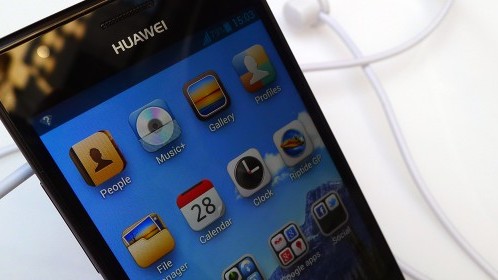 The new flagship device, revealed at the first official keynote of Mobile World Congress 2013, sports an in-cell touch display with a resolution of 1280×720, topped with Corning Gorilla Glass 2 for extra protection.

It will be available in France at €399 sometime in June, through mobile network operator Orange.  It will then be launched globally throughout the second quarter of 2013.

Huawei claims that the Ascend P2 is the world’s fastest smartphone, pointing to a hi-silicon K3V2, quad-core 1.5 GHz processor as evidence. It’s coupled, however, with a much more modest 1GB of RAM, as well as LTE Cat4 support for mobile Internet speeds of up to 150 Mbps depending on the area.

The Ascend P2 is also equipped with an impressive 13 megapixel camera on the back, which can be used to shoot video in 1080p high definition and high dynamic range (HDR) photos, as well as a more lackluster 1.3 megapixel shooter on the front.

Huawei is targeting this new high-end device as a cheaper alternative to other flagship Android smartphones on the market, such as the newly unveiled HTC One, the Samsung Galaxy Note II and in all probability, the upcoming Samsung Galaxy S4.

The Ascend P2’s 2420 mAh battery is well above most of its competition, and it’s also running the latest version of Android, complete with its own Emotion UI skin.

Huawei’s new smartphone will be available in both black and white, and weighs in at 122g, which feels notably light in the hand compared with other high-end Android smartphones. Specifically, the device also has the following physical dimensions – 136 x 67 x 8.4mm.

“Ascend P2 is the perfect combination of elegance and power, and further proof that there’s no need to compromise when desiring a perfect smartphone,” Richard Yu, CEO of Huawei Consumer Business Group said. “It is evidence of the outstanding smartphone experiences and great technology that we are committed to bringing to consumers globally.”

Check out our hands-on and first impressions of the Ascend P2 here.