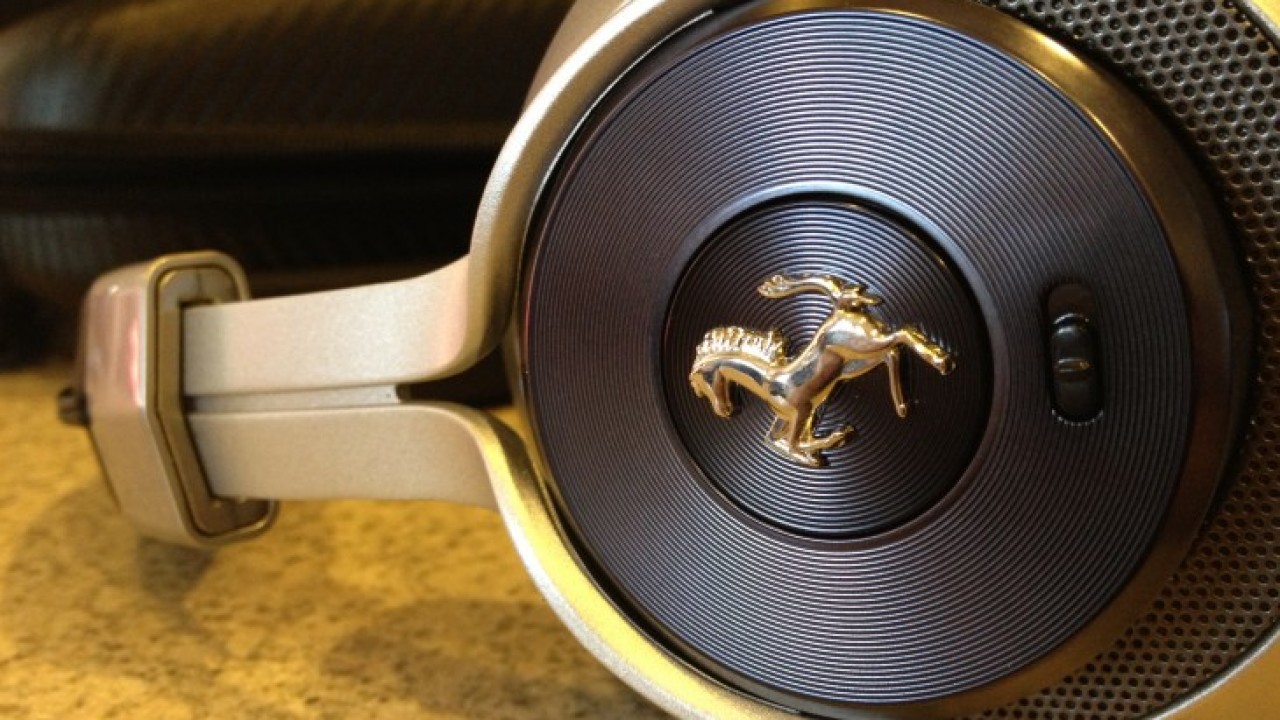 Let’s talk headphones. Specifically let’s talk about the active noise canceling headphones from Logic3 dubbed the Ferrari Cavallino T350. I first got my hands onto these expertly-crafted ANCs at CES in 2012. Yes, that was in January of 2012. So yes, it took a year for them to finally hit my doorstep. With a price tag of $400 and after being on hold for 365 days there was one thing that I knew for sure — These headphones had best be incredibly good. But are they? The answer is undeniably yes. And no. Read on, my audiophile friends, as we talk about the point where headphones and sports cars meet.

From an aesthetic aspect, there’s no way that I can fault the T350s. They are positively stunning. Strong, solid plastics combine with lightweight metal and luxurious leather to create an overall touch experience that is above any other noise canceling headphone that I’ve used. Interestingly, even with these top of the line materials, the T350s manage to stay light enough to wear comfortably for hours.

Accessories are in line with what you’d expect — There are three cords (straight, microphone and Apple-specific 3-button), an airline adapter and a quarter-inch stereo plug. The entire package gets wrapped into one of the nicest cases that I’ve ever seen. It’s a high-density material, that feels somewhat like extraordinarily strong foam. However, it’s coated with a faux carbon fiber finish to give it a modern, sports car inspired look. The case includes a carrying handle, fastened securely by a nylon webbing.

We’ll talk more about that case in a moment, but let’s chat a bit about sound quality because that’s the single most important thing when it comes to spending money on audio equipment.

I’ve tested literally hundreds of headphones, both for professional review and in my personal collection. The T350s are, without any argument, the best-sounding noise canceling headphones I’ve ever used…as long as you’re listening to a few genres of music. Classic and progressive rock tend to sound amazing. The same can be said for classical guitar, organic drums and piano. Genres aside, just about anything that was recorded prior to 1988, or anything recorded to tape, is a joy to listen to. The same can be said for more modern recordings that were done in analog studios.

But the vast majority of music that we listen to today doesn’t fall into these specific subsets. Unfortunately it’s our treatment of music that causes a flaw to appear in the headphones. Any music with an already-emphasized high frequency range turns almost painful at louder volumes with the T350s. That’s not to say that the headphones are bad. Quite the opposite, in fact. They’re truly some of the best I’ve ever used…but they have to be used with a bit of rationalization for what they do extremely well and perhaps where they falter.

When you’re in that musical sweet spot, listening at about 60-percent volume to a track that was recorded via analogue methods and it features softer, organic sounds like strings, it’s a spine-tingling experience. Take away one of those factors and they’re still really good. Remove two? Things start to degrade somewhat quickly. Fortunately, because of the active noise cancellation you can keep the overall volume lower than you would with other headphones. Your musical choice? Well, let’s just say that Bieber fans aren’t going to like what they hear.

Battery life on the T350s was fairly average. I managed to use the headphones for a few hours each day over the course of a week, and a battery tester told me that I still had over half of the battery life remaining. I’d venture a guess that you’ll see around 20 hours of playback before you’ll need to reload a fresh set of AAAs. Just don’t forget to turn them off when you’re done. Like many ANC headphones, they won’t work with the power turned off, but leaving them on continues to drain the headphones even when they’re not reproducing sound.

Now back to the case, which is actually a question of construction of the headphones themselves. When I think of situations in which I’d want to use ANC headphones, I’m typically reminded of flights, train rides or maybe long car trips. In each of these, portability is a somewhat major factor that I’m going to take into account when I’m deciding on what to throw into my bag. The T350s? They’ll never make it into my bag.

They don’t fold. And they’re big. And their case is big. Like…really big. There’s not a single bag that I carry onto a plane in which I’d feel comfortable giving up the space required in order to carry these headphones on a trip with me. That fact is a real shame, because everything else about these headphones deserves your time, attention and at least a consideration of your money. Opting away from portability is a serious oversight in my book.

Facing facts, if you buy a set of well-made, active noise canceling headphones, they’re going to be pretty darn good. Bose, AKG and PSB all have great choices. Logic3 hasn’t produced the absolute best set of ANCs on the market, but they’re very close. They are, however, the most comfortable ANC headphones that I’ve ever worn, and they’re also the classiest in appearance. If those are points that matter to you, and you can keep your volume a few notches below 10, then the Ferrari Cavallino T350 ANC headphones absolutely need to be on your list.