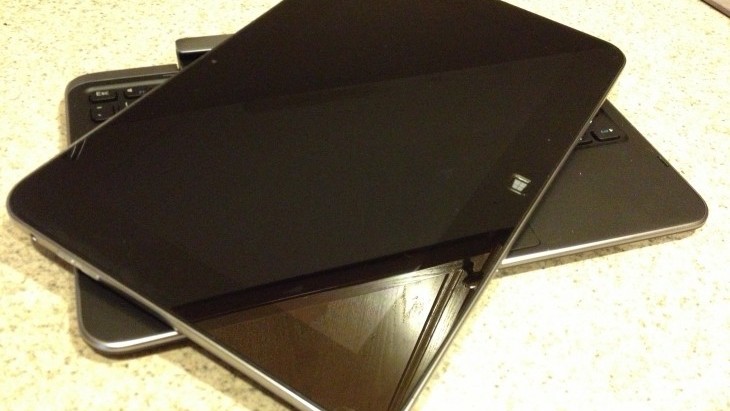 First thing’s first, let’s get this out of the way — Windows RT is a confusing, crippled version of Windows 8. The lack of app choices, the fact that you have a desktop mode but not being able to run true (.exe) desktop apps and the overall lack of consistency through the OS create big problems. But that being said, if you’re sold on Windows RT then Dell’s got a tablet that I think you’ll really enjoy. It’s called the XPS 10.

The XPS 10 is a 10-inch, 16:9 tablet that comes in two flavors. I’ve been testing the lower-priced ($499) model of the two, which pairs a Snapdragon S4 1.5GHz processor with 32GB of flash-based storage. It weighs in at 1.4 pounds (or 2.89 with the dock). Dell was also nice enough to include a keyboard dock, which makes working on the device quite akin to working on a laptop. If you’re going to buy the XPS 10 then I suggest that you spend the extra $179 and get the dock as well. We’ll talk more about that later.

First, a bit about the hardware. The XPS 10 follows Dell’s now-famous XPS line in sporting hardware that you’ll actually like to use. Most tablets on the market, save for the iPad and a couple of very notable Android exceptions, exhibit body flex and feel rather cheap. That’s not the case with the XPS 10. In fact, I’d say that it’s the nicest Windows RT tablet that I’ve used, with a couple of caveats.

Yes, that means that I think it’s on par with the Microsoft Surface.

But there’s a conundrum in comparing these two devices, because they’re really very different. So you have to ask yourself what tradeoffs you’re willing to accept. For example, the Surface RT includes a USB port on the tablet itself. This is handy for using a mouse when you’re using it like a laptop. Want a USB port on the XPS 10? You have to buy the dock. But in doing so you’ll actually get two USB ports, plus an HDMI output. I also prefer the velvet-like texture to the back of the XPS 10 over the “VaporMg” case of the Surface. But this is a personal preference. You might like the Microsoft product better.

So comparisons aside, let’s talk about the merits of the XPS 10 on its own.

The 10-inch screen is beautiful. It’s truly one of the better looking screens I’ve seen on a non-iPad tablet. Touch response is fantastic, and battery life is positively stellar. I clocked in a solid 7 hours on the XPS 10 before getting a low battery warning. This included a plethora of email, Web browsing and using Xbox Live Music. If you buy the dock, you’ll get even more (Dell claims up to 18 hours) because of the secondary power that the accessory provides.

Running a slew of applications, I was impressed by the Snapdragon’s ability to keep up. Part of that credit is due to Windows RT and how it handles multitasking, but I rarely noticed any sort of stuttering or hesitation when switching to new apps, no matter how long they had been dormant. Likewise, there was no notable hesitation in even heavier apps such as the included version of Office. I opened and worked with rather large spreadsheets without issue.

I will take this opportunity, however, to address the Desktop mode of Windows RT. Though it’s not Dell’s fault, the XPS 10 chokes in Desktop mode. The multi-window way in which you’re likely to be using this format means that the Snapdragon processor doesn’t get respite from the Windows RT multitasking scheme. When that’s the case, it chugs along dutifully, but it’s far from elegant.

Overall Dell has done a nice job of providing a machine on which you can do real work, and then snap off the dock to sit back on the couch to enjoy your evening. On this level, I think that the XPS 10 feels a bit more “work-ready” than the Surface RT.

If I were buying a Windows RT tablet today, I’d seriously consider the XPS 10 over the Surface RT. The dock is wonderful (Dell’s keyboards are largely very good these days), the processor is strong and the screen is second to none. With the 32GB tablet and a dock, you’re still under $700 and you have a machine that’s far more convenient to use in almost every way than the laptop upon which you’re probably reading this review. Maybe it’s not the most powerful kid in school, but it’s almost definitely the smartest.