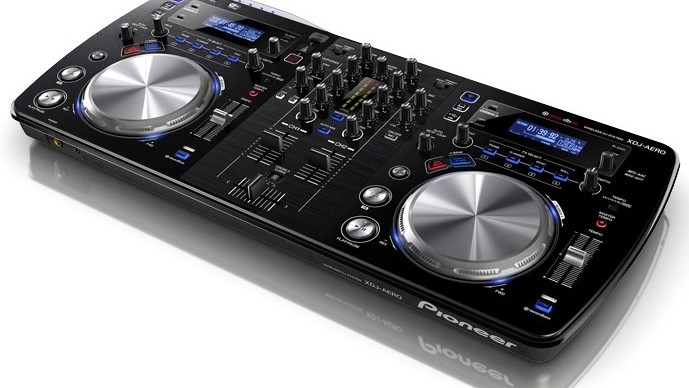 As a purist DJ I’ve had my share of difficulties making the move away from vinyl and into controllers. So when I saw Pioneer’s XDJ-AERO and its complete disregard for even so much as an external program I was skeptical to say the least. But in the past month, as much as I’ve wanted to hate everything about this device, it’s become a guilty pleasure of mine. So read on, gearheads, and let’s delve in to why this “toy” has earned such a place in my heart.

The first thing that you’ll notice about the AERO is that it looks like just about any other controller on the market. It’s a 2-channel setup, with standard-sized platters and many of the buttons will change their function depending upon your selection. The next thing that you need to know is that this is not a professional-quality, installation mixer. This is for the bedroom or hobbyist DJ who wants a load of flexibility.

Along the top you have access to the standard level meters, tempo controls, channel faders, a non-replaceable crossfader and even a few effects. But there are three buttons at the top left of each deck that begin to show you why the AERO is different. Labeled as Rekordbox, MIDI and USB, they’re a selection system that will allow you to run each deck from a different source. Oh, and you have traditional phono and line inputs as well, if you’re into that sort of thing.

The platters are standard fare for Pioneer, meaning that they are non-motorized and touch-sensitive. Spinning them clockwise or counterclockwise will speed up or slow down a track. Touch the top and, akin to touching a record, the sound will stop. It’s a bit too sensitive for my liking, but easy to get used to.

But back to those buttons. MIDI and USB should be pretty familiar. That’s MIDI over USB, so you can use things like Traktor or Virtual DJ. USB happens via a top-mounted slot. Load up a USB drive with tracks, plug it in and then access the tracks via the display on each deck. It’s not perfect, due to the low display resolution, but it works. But the most interesting part is the Rekordbox integration.

Rekordbox is an interesting twist. It’s a music management software that you can use to organize track, set hot cues, color code and even export playlists to a USB or SD card. The mobile version of Rekordbox works beautifully with the AERO. Load up the app on your iPhone and you have access to your phone’s music. Load those tracks into Rekordbox and you can assign them to the left or right deck. The AERO accomplishes this by creating an ad-hoc WiFi network, complete with password, to which your phone can connect.

Kitchy and over the top? Sure. But it’s a ridiculous amount of fun to control the system while you’re on the other side of the room, and having super-quick access to music on your mobile is definitely an interesting twist. Again, this isn’t club installation stuff. This is “how fast can I access music on every device that I own” stuff.

The device itself is primarily plastic, and as such it creaks and flexes. This is unfortunate because it gives a lower impression of the device than it deserves. It’s doubly unfortunate because the near-$1,000 price of the XDJ-AERO means that you should have some better rigidity to the hardware. Knobs and faders, however, typically feel very nice. My only complaint is that there’s some vertical movement to the crossfader, but it’s not severe. Buttons, on the other hand, leave a bit to be desired from a tactile standpoint. Yes, they work, and yes they have a good-feeling press to them. But they’re loose and feel generally cheap in contrast to the knobs and faders.

The AERO is meant to be a step up from Pioneer’s rather unfortunate offering of the DDJ-ERGO. As such, just about every complaint that I had with the ERGO’s hardware is solved by the AERO. But there’s also a $400 difference in price points between them. The Rekordbox system, I have to say, is something that I’d actually welcome in Pioneer’s more high-end offerings. While it’s obviously not ideal, it would make an amazing “oh crap” button for when a control computer decides to go nipples north during a performance. Or heck, even give us the USB play function. That would work too.

Sound quality on the device is pretty standard for Pioneer’s mid-level gear. It’s good, but not fantastic. Then again, the same could be said for the sound system that this device will likely be used on. We’re talking home stereos or lower-end studio monitors here, not million-dollar installations. The effects, likewise, sound good but far from spectacular. Though the device does do an admirable job with compressed audio, seemingly without adding further compression, even over the ad-hoc WiFi.

So the ultimate question is whether you should buy it. Here’s where things get difficult. It’s a genuinely fun, rather impressive unit. It has more potential function than just about anything on the market. But for $1,000 even hobbyist DJs will likely find more respite in other offerings. Native Instuments just came to the market with the Kontrol Z2 and it’s positively amazing, even at $900 MSRP. Novation’s Twitch is still the controller to beat for Serato Itch and it’s a mere $500 on MSRP.

Pioneer has done great things with the XDJ-AERO, and there’s likely going to be a market for it. Though my gut tells me that this mid-class mixer is going to be flanked and defeated by Pioneer’s other offerings before we even take other brands into consideration. But if you’re in the market for something that’s a heck of a lot of fun, and meant to let you play your music no matter where it is, the AERO is going to be hard to beat.