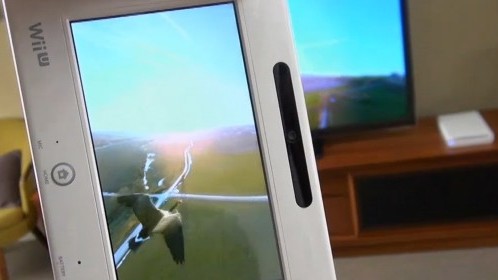 Nintendo has announced that it will be bringing Google Maps to its new Wii U video game console in January next year.

It was revealed by Satoru Iwata as part of a Nintendo Direct presentation that was broadcast online a little earlier today. He showed viewers how they will soon be able to move the new GamePad controller, which has a 6.2-inch touchscreen and built-in gyroscope, to get a better view of the maps produced by Google.

The functionality was being used to show of the Wii U’s new ‘Panorama View’ feature, which allows you to look around pre-recorded videos such as a London bus or scuba diving expedition. It’s a pretty neat trick, and while Street View is essentially just a series of stitched photographs, the GamePad should help to make the entire experience feel a little more seamless and believable.

Both the standard map view and street view will be available from the outset, both on your television and the secondary screen on the new controller. Other details were scarce, although we know that the app will be free for the first two months. After that, however, you will have to fork out a currently unspecified amount of cash.

Nintendo has been using these online videos to try and explain to consumers not only what the Wii U is capable of, but also what they can expect from the console in the coming months and years. It’s been a mixed bag so far, as although consumers have enjoyed hearing more from the traditionally tight-lipped video game giant, the videos themselves have often been too long and lacking in any real detail.

The Wii U, far more than the Wii before it, is positioning itself not only as a video game console but also as a multimedia device. We’ve already seen the Wii U’s video chat functionality, as well as its unique Miiverse community concept, but it’s the addition of third-party companies such as Netflix, Hulu and YouTube that has established itself as a competitor to the additional offerings both on the Xbox 360 and PlayStation 3.

The addition of Google Maps is an interesting one though. In what situation would you want to look at an address on your home television, rather than a PC or laptop? While finding your house on Street View is always fun, the real world applications end there.