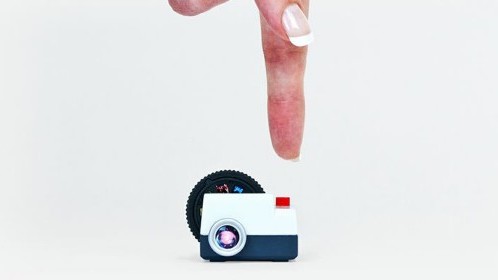 Projecteo, a miniature projector for showing off all of your favorite Instagram photos, has been launched on Kickstarter today.

The product itself comes in two parts; the projector, which looks about the size of a paper clip, and a slide wheel for alternating between nine images.

What’s novel about Projecto is that everything about it is analogue. So rather than simply projecting a digital image, users would log into the Projecteo website, authorise their Instagram account and then select nine of their favourite images. Projecteo then develops these onto a piece of 35mm Kodak film stock, just like in the old days, before then posting it back to you as a slide wheel.

All you have to do then is throw the slide wheel in and start projecting it onto a blank wall. Voila!

Projecteo has been dreamed up by Ben Redford, who works at an agency and product development company called Mint Digital. The idea needs $18,000 to begin mass manufacture, although a prototype has already been created with the help of a product development consultancy firm in Scotland called Meso.

We’ve already seen Mint Digital bring some ingenious ideas to life, such as Foldable.Me, which lets you create a 3D cardboard figure of yourself, as well as Stickygram, which turns your favourite Instagram images into magnets. So it’s safe to say this project is in pretty safe hands.

“The spark for Projecteo came when I found a Rollei P35 projector in a London market. When I took it home, I was enthralled by the warmth of the images it projected. There’s no digital image that can match it. When I took it apart, I saw that the mechanics could be miniaturised. I thought that using Instagram images would bring this magical warmth to how we take photos now. We need your help to make Projecteo a reality.”

If Projecteo is funded successfully, Redford believes they’ll be able to start making the projector properly as early as mid-Decemeber. Then, if the units meet the necessary standards and EU/FCC certifications, backers should be receiving their Projecteo around February. Which isn’t bad at all, all things considered.

If you decide to pledge $20 or more to the cause, you’ll be one of the first backers to receive a Projecteo. However, throw in a extra five bucks and you’ll have your first wheel developed straight away. For forty of your hard-earned dollars though, you can opt-in for a limited edition Projecteo coloured to represent the classic Rollei P35 slide projector. Nice.

If you’re really feeling generous though, – and I mean really generous – $350 will mean that the Projecteo designers sit down with you to create a projector that is completely unique. Colour combinations, a personal message, logo or name, everything is available for you to mess around with. $500, the top pledge bracket, will make it gold plated. That’s right. Plated in real gold.

If you’re a fan of analogue photography, this is a fantastic opportunity to have some of your favourite Instagram prints preserved in film form. However, part of Instagram’s success has undoubtely been its zero entry fee, as well as the ability to shoot and ‘process’ an unlimited number of shots for the world to see.

Projecteo is asking that you accept production costs and wait times again for each slide wheel, which will no doubt feel like an outdated concept to some. Others will argue that this is all part of the fun though, and how photography was always meant to be. We’ll let you be the judge.