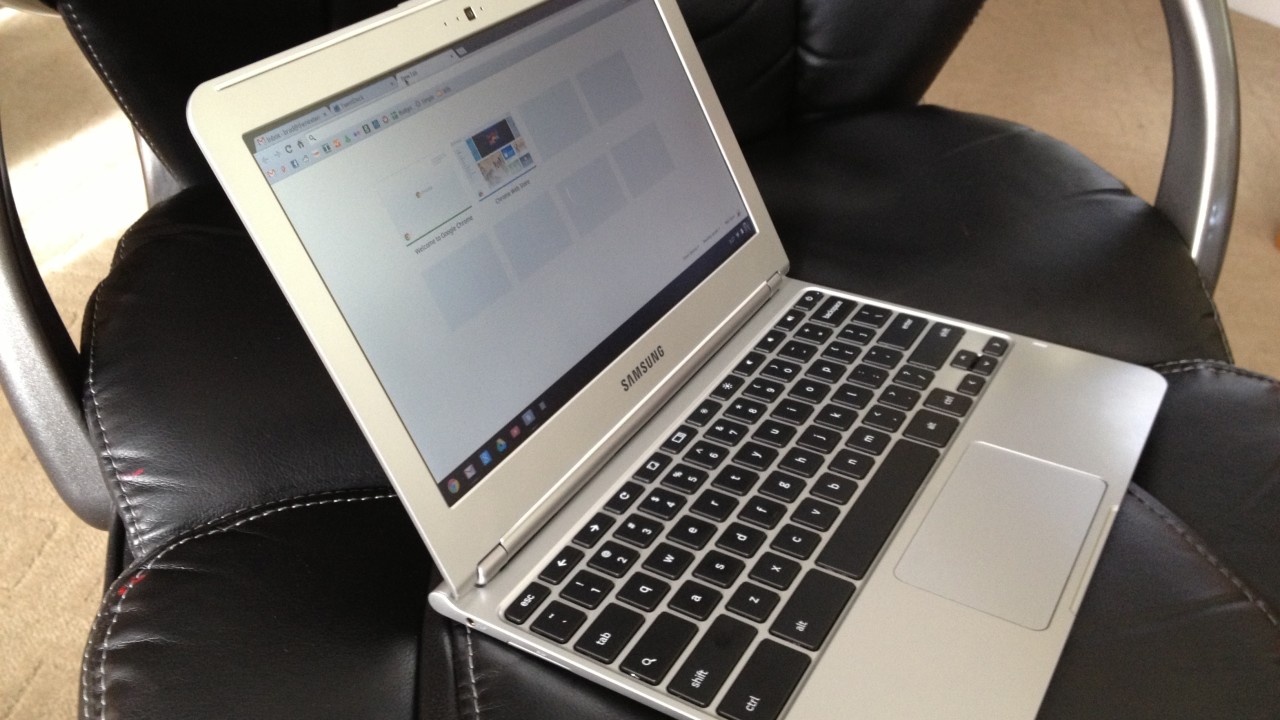 You’d be forgiven, first off, for mistaking the new $249 Samsung Chromebook for a MacBook Air. At first blush it doesn’t just look like one, it looks a lot like one. But the impression will wear off quickly as the means to that $249 price tag becomes readily apparent. Google’s new Samsung-made Chromebook landed on my doorstep a few minutes ago, so I thought I’d bang up a quick first impression on the device.

If you’re familiar with, and a fan of, the previous generations of the Chromebook then chances are that this version will be the answer that you’ve been waiting for. It’s thinner and lighter, with the same mediocre display quality, but it’s also faster and includes new interconnections. Along the back you’ll see a power plug and USB 2 port, but also a USB 3 and HDMI out.

The left side plays home to a combination microphone/headphone jack for use with mobile headsets. There’s also an SD card slot with a spring-loaded cover to keep you from having a dangling piece of plastic on your machine.

The keyboard is good, if not great. The same can be said for the trackpad. Though there’s a strange clicking behavior to the pad that keeps it from registering clicks if there’s too much pressure on the left or right side, toward the front, of the device. I was holding it in one hand while trying to do the initial setup clicks and couldn’t get them to work at all until I set it on a table.

One area where I absolutely will give the Samsung team its due credit is that the trackpad finally allows for very smooth scrolling in most situations. Unless you happen to be heavily taxing the device, it works great.

Generally speaking the new Chromebook feels snappy, and the same instant-on feature that the Chrome OS has always exhibited works better than before because of the speed improvements. But I can’t quite get past the feeling that Samsung took a MacBook Air, formed it out of plastic with a thicker front end and then jammed low-cost components into it. When it’s open, every single time I look at it, I’m reminded of the Air.

There is a 3G version of the Chromebook, and you can order it for $329. The device that was sent to me does have a USIM slot, but I see no way to activate it within the settings. So it’s a bit hard to tell if there will be any difference between the two, or if it’s just a matter of activating the slot to save on manufacturing costs.

So my first impressions would be this: If you’re a Chromebook fan, but you’ve been holding off because of the price alone, then you’re going to like this new version. $249 is compelling for a device this light and capable. It absolutely will not keep up with the MacBook Air or any Ultrabook on the market, but it’s not really meant to. It’s meant to be the Internet, in your lap, on the cheap, and it does that very well.