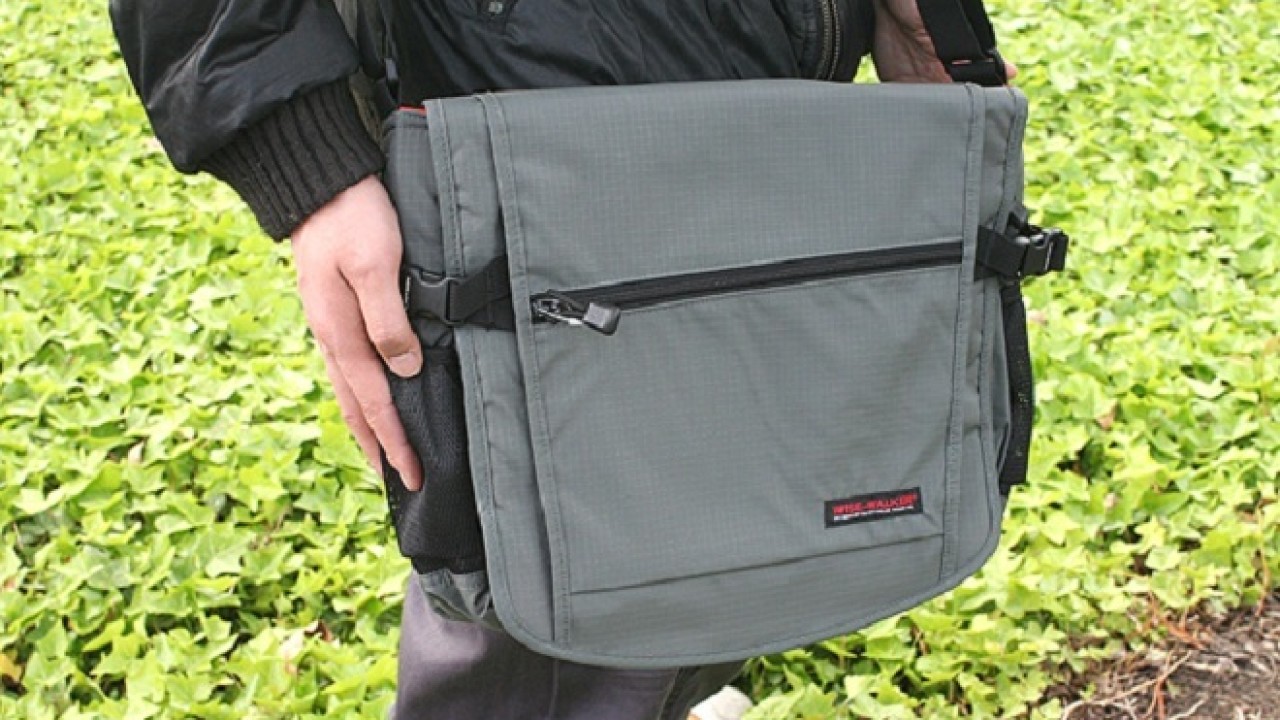 Let’s talk bags. First off, you have to know that I have an obsession with finding the perfect bag, and I try to avoid the “usual suspects” whenever possible. There are just far too many great choices out there to limit yourself. So when the folks over at JetPens got in touch about the Nomadic Wise-Walker WR-08 shoulder bag, I was intrigued. This city-born messenger bag promises to hold more than it would appear possible, while still staying small enough to not require a second seat on the bus.

At first blush the WR-08 is just another messenger bag. Its main pocket is the perfect size for a 15-inch laptop, but a 13-incher would be more at home as 15 inches means that you’re going to have a tight fit. In front of that main pocket there’s another compartment, which I found to be the perfect size to fit my iPad inside of its Twelve South BookBook case.

While having two larger compartments isn’t uncommon, where the WR-08  differentiates itself is that there’s a third. It’s along the back of the bag, and it’s plenty big enough to hold either your computer or iPad, a tablet of paper, some cables or whatever else you might want to throw at it. But here’s the kicker – the entire bag is also physically smaller than almost any other one that I’ve ever used.

That’s really the selling point of the Nomadic brand. They’re made in Japan, a place that’s known for crowded public transportation and where saving space comes at a premium. The WR-08  is made from rip-stop nylon, with contrasting-color nylon on the inside. Using the nylon saves not only space, but also allows unused portions of the bag to “collapse”, keeping the overall-tiny footprint.

Flipping open the top flap, you’re greeted with the two main compartments, but also a healthy bit of organization, as well as a mesh area for keeping small, hard-to-find items. I was a fan of this area for stashing my wallet and phone while dashing to the security line at the airport, and there’s just enough padding to keep everything feeling safe without going bulky.

Along the front of the bag, under the flap, there are two large cargo pockets. For me, this served as a holster for my MacBook Pro’s charger. I’d wind up the wall cord, stick it into one side, then put the power brick into the other. I was pleasantly surprised to see that the flap would still Velcro into place, and the elastic straps on the side of the bag helped to keep it there.

Now let’s take one moment to focus on the not-so-good. Nomadic chose to not waterproof their bags. I got caught in a sprinkle one day and was surprised to see the bag’s sponge-like tendency. Had I known this before, I’d have grabbed a $5 bottle of waterproofing spray and coated the bag. If you buy one, I suggest you do the same. It works wonders.

My only other gripe is what I’d classify as an over-use of Velcro. You can argue against my point of view here if you want, but I really don’t like that ripping sound happening every time that I want to grab something out of an inner compartment. There’s Velcro on the closing flap, more along the inside pockets and yet even more to keep separators in place. It was a bit much in my opinion and Nomadic could have chosen a different route, such as a magnetic fastener.

At a retail price of $84 the WR-08 stands in line with most other mid-range bags. It might not hold more than something from  Timbuk2 (another favorite of mine) but it’s going to be infinitely easier to carry around and it’s hard to argue with something that’s still very good at nearly half the price.

If you’re in the market for a new bag, give Nomadic a look. The company has loads of unique solutions and we’ll be reviewing a couple more very soon. For a messenger bag, the WR-08 is absolutely my new favorite.