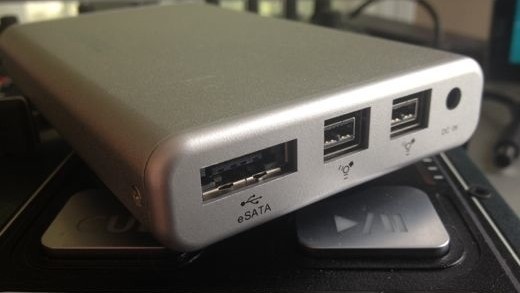 There’s certainly no shortage of portable hard drives on the market these days. So justifying a price tag of up to $270 means that WiebeTech’s ToughTech mini-Q better be something special. Fortunately, it’s special indeed, but much more because of the enclosure than the drive inside of it.

First, let’s talk about the drive options. You can get the mini-Q with your choice of hard drive, in sizes of 250, 500 or 750 GB. These aren’t anything out of the ordinary, other than the fact that they’re a 2.5-inch drive spinning at 7200 RPM. Speedy, yes. My review unit came equipped with a Hitachi-branded drive that retails for around the $80 mark.

But you can also get the mini-Q without a drive. You’ll save yourself a few bucks by adding your own, but convenience may be worth the cost. That’s up to you.

Now on to that enclosure. Around the outside you’ll see two Firewire 800 ports, and a combo USB/eSATA port, then a DC in jack. The rest of the enclosure is sleek, with only a power/activity light gracing the other end. It’s crafted of thick aluminum, with the endcaps formed of plastic. The only other hole is for a Kensington lock, which connects directly to a metal ear on the inner tray.

You’ll notice, in the image above, that there are rails that run the length of the enclosure. These correspond to the slots on the side of the adapter tray, acting as a lock to keep the drive in what is essentially a floating state inside of the enclosure. The bottom of your drive will be mounted to the tray, but then there’s plenty of top and bottom clearance that allows your drive to stay cool.

The real magic of the mini-Q however is in the adapter that holds the drive. While SATA to USB adapters are nothing new, I’ve not seen an adapter that does Firewire (800, but 400 works too), eSATA and USB in a single unit. Usually they require plugging and unplugging, which leads to degradation of the SATA connector on the drive. To top if off, WiebeTech uses the Oxford 934 chipset to mange the whole thing, a piece of technology that makes the transfer process blazingly fast.

What I love about how WeibeTech packages the mini-Q is that it comes with literally everything that you’ll want. eSATA cables, Firewire cables, USB cables, a power adapter…heck, there’s even a screwdriver for taking the thing apart and using it to mount your own drive.

As for performance, it’s really a matter of the speed of drive that you choose to buy, plus what connection you’re using. What’s great about the setup is that, with dual Firewire ports, you can choose to daisy-chain the drives. I’ve transfered to and from the drive numerous times in my testing and, as you’d expect, gotten great speeds. I won’t get into the super-geeky specifics, but the drive runs fast.

The short version of this story? The mini-Q is a small enclosure with huge speed and even bigger functionality. At $120 it’s no bargain-basement piece of technology, but it’s worth every penny and more for what it provides.