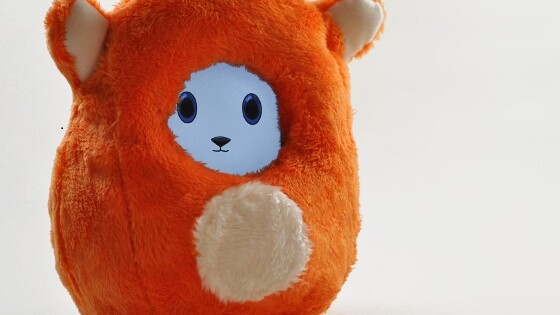 There’s an advantage that my kids have – they get to play with new toys pretty often. Sometimes it’s a new “kid-proof laptop”, or a set of magnetic building dots, but this time, it’s Ubooly. Ubooly is a stuffed, plush toy, that uses your iPhone or iPod touch for its face. Just zip your device into Ubooly, start the app and then talk to the toy with natural language to navigate your way through jokes, stories and learning material.

Ubooly is the brainchild of Boulder-based husband and wife team Carly and Isaac Gloge. Right now the product exists as a project on Kickstarter, where it’s gathering steam quickly. Ubooly has already raised nearly 1/3rd of the cash that it needs to come to life, but I was able to get my hands onto one of the plush toys and the app so that my 7 and 9 year old kids could play with it this weekend.

The first thing I’ll say is that the natural language processing works great. It’s simple, primarily consisting of yes or no answers, but it’s pretty fantastic. That is, unless your child happens to try to over-pronounce something, in which case Ubooly’s app can get a bit confused. My daughter, for instance, was saying “no” as “noooooooooooo-uh” and the app didn’t understand her. It was comical enjoyment for my wife and I, but not so much for her.

Right now, of course, the app is a bit limited. The team, however, says that buyers can expect new content at least once per month, available as an in-app purchase. There’s also an ever-expanding “laboratory”, where your kid can work with Ubooly to teach it new languages, play new games and more. For the launch, there will be 4 hours of content, and I can tell you that my daughter (the 7 year old) thoroughly enjoyed what was included in the pre-release software.

That’s probably the most interesting fact for me, to be honest. When I looked at the content, I didn’t think that my daughter would engage with it very actively, as it appeared to be something that was aimed more for younger kids. (I’m assured that content for children up to 9 will be available, but again, the version that I used was pre-release.) But I was pleasantly surprised, because not only did my daughter find it entertaining, I was told over and again “I love this so much”. I’m interested to see how much she continues to interact with it as new content becomes available.

At any rate, right now, Ubooly needs your help. The company still has about 50 days left on its Kickstarter campaign, but I’d love to see it take off far ahead of the final date. Head over to Kickstarter, check out all the details and let’s make this one fly.