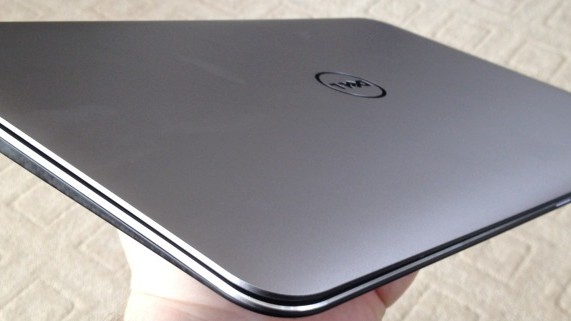 Every time that a new laptop lands on my doorstep, I’m faced with the fact that I’m going to have to give up my beloved MacBook Pro for a testing period with the new device. Generally speaking this is a slight feeling of dread, but Dell’s promises with the XPS 13 had me excited. The flagship Ultrabook from the Texas-based manufacturer has been on our radar for a while, so I was excited to get my hands onto it. FedEx made the delivery this morning, and I’m going to do a full review later, but here are my initial thoughts about Dell’s answer to the MacBook Air.

First off, that’s exactly what this is — A MacBook Air competitor. In fact, that’s the entire line of Ultrabooks, no matter the maker. Intel put rigorous walls around what could be called an Ultrabook, and almost everything about them is set up in line to make sure that Apple doesn’t continue to own the market for the form factor.

Dell’s XPS 13 is a piece of technological art. That much is for sure. It’s just a ouch over 3 pounds, as mine is configured (the higher end version is what Dell sent to me, with a Core i7 processor, 4 GB of RAM and a 256 GB SSD). It’s not as thin as the Air, but it’s still plenty svelte. You could easily stick the 13 into a briefcase or bag and carry it around without really noticing.

The top of the device, as you’ve likely seen, is finished in machined aluminum. Underneath is carbon fiber. The keyboard feels great, but decidedly different than most. It’s a chiclet-style, but has a slight concave to the buttons, making it feel a bit more resolute to your touch. It’s nicely back-lit, and you can adjust the brightness as you desire. I like Dell’s choice to have the F-keys remain F-keys, and for them to require a secondary push of the Function button in order to act otherwise.

The trackpad is…actually good. In fact, it’s probably the best one that I’ve used on a Windows-based machine yet. Like the Apple, it features a single surface that acts as a button, so you can click anywhere to get response. A two-finger click acts as a right-click. A four-finger swipe down minimizes everything to your desktop, swiping back up displays an alt-tab type window where you can select from running programs.

I’ll examine each of these areas a bit more in-depth when the full review comes, but for now I’ll say that my first impressions are good. I can comfortably touch-type on the keyboard, even though the 13-inch Ultrabook has nearly the same form factor of an 11-inch device.

Dell’s done a very nice job with the display, as well. Though it’s glosssy, and I’d prefer matte, its 13-inch size goes edge to edge, with only a small aluminum bezel left over from the lid. The resolution is fantastic, at 1366×768, which is nice to see since many manufacturers try for something much higher, leaving smaller screens such as this unusable.

I was told, in no uncertain terms, that the XPS 13 was not intended to be a media or gaming machine. But being the type of person I am, I had to play around a bit to find out. Fortunately I was pleasantly surprised. The XPS 13 turns out a solid 40-60 FPS in lighter games like League of Legends. Stepping up to higher-demanding games, however, would be ill-advised as the device lacks a dedicated GPU.

Dell claims that nearly 9 hours of battery life is possible with the XPS 13. In more real-world scenarios, I’m reading that people are seeing between 4 and 5 hours with this configuration. I’ll be running that test as well, to let you know what we find. Yes, you can min/max a battery test, but I prefer to look at numbers that reflect what you’ll actually be doing with a device, instead of tweaking every setting to get the highest possible number.

That’s where I’ll leave my first impressions, for now. Anything more and we’ll end up getting into a full review, which simply wouldn’t be fair just yet. To give you the summary, Dell has done a great job with the XPS 13. It’s thin, light, capable and…actually fun to use. In all of my testing, it’s the first time that I’m not counting down the minutes to be able to move back to my Mac. From a long-time Windows user who made the switch, that’s saying quite a lot.