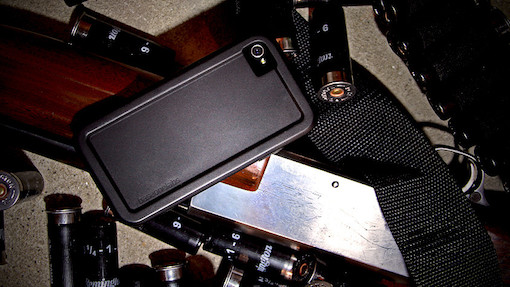 File this under “awesome things that you should buy right now.” As reported by Core77, BaseOneLabs is using the collapsible air pockets from the inside of shotgun recoil pads to create an impressively shock absorbent iPhone case. The result of this is the GunnerCase.

When the GunnerCase is dropped, the side-walls are designed to collapse and distribute the force around the case. This saves your iPhone while keeping the case thin (only 13.9mm thick) and effective.

Internal Air Cells – Lined throughout the inside of the GunnerCase are Air Cell pockets that were inspired by recoil pads found on shotguns and rifles. When dropped, the Air Cells collapse absorbing impacts, providing the same protection as a case twice as thick.

You can pre-order yours now for $40, for delivery in late March. The design of it is pretty basic and un-slick, but the minimal detail speaks to the nature of the product. It’s a tool, just like a recoil pad. Not decoration. If you’re looking for that, you should just grab something from BlingCases.