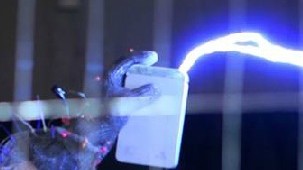 The guys at ioSafe set up a pretty impressive demonstration of its rugged hard drive line at CES, which it just added a Thunderbolt connector to. The demo involved applying a 1M volt tesla coil to the casing of the drive.

Unfortunately, some of the sensitive electronic boards of the drive were fried by the lightening, but the demo is saved by some slick tech support under pressure by Moore. But the best part of the demo comes when the guys decide to punk the group of journalists that came to the presentation, just watch it through to the end.

Neowin Editor Brad Sams was at the demo (their vid is here) and told me that it was pretty convincing:

The guys at ioSafe said that a lot of cussing and threats were edited out, I bet. We have one of the Firewire 800 models of the company’s rugged portable hard drives in the labs now and we’re putting it through its paces. The Thunderbolt model will be rolling out in Q2 of this year.