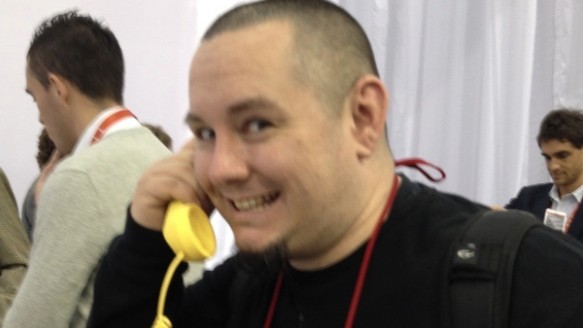 It happens at every conference – a deluge of useless crap that somebody somewhere will actually buy. CES 2012 was no exception to this and there were actually far more terrible items than I could have possibly fit into a single post. So we picked 5 of our “favorites” from a single hall and rounded them up for you.

Now, in no particular order, here are the worst things we saw at CES:

Pat Says Now had quite a few peripherals and some of them were actually quite nice. This one, however, didn’t make the cut. I suppose that it will be a fit for someone. Most likely a basement-dwelling neckbeard.

I first saw these at CTIA last year, and I kinda blew them off. I figured that there was no way that the company would be in business in another 6 months. Apparently, I was wrong. Or at least I was wrong enough that the company can still afford to set up a booth at CES.

This company is so concerned about radiation that they even manufacture their own “personal note recorder”, which is a small video camera that they think you’ll use so you don’t have to touch your phone. But these horribly-ugly handsets really took the cake. Unfortunately I couldn’t keep a straight face long enough to get an interview with the maker because his tinfoil hat ideas had me cracking up a bit too much.

Ssd Pedobear was all over CES this year, mainly from Asian manufacturers of mobile accessories. There was actually a great set of wired headphones with Sad Pedobear on the ear cups, but this case provided for a better picture. Now, is that a bear in your pocket or are you just happy to see me?

Pretty Much Everything in This Booth

For those of you who have been to a Spencer’s Gifts, this will look really familiar. But to put an “electronics” twist onto this company’s crap, everything that they sell has lights, or beeps or is otherwise electrified. I could have picked 5 random things from here and they could have all been terrible, but I figured that I’d spread the love around somewhat.

So there you have it. 4 eye-rolling pieces of junk, and an entire booth full of them! It’s too bad that we couldn’t find the better butt-cleaning toilets again. My goal was to have TNW’s Matthew Panzarino do a demo for you, but we got lost in the CES shuffle.

Want to see the stuff from CES that didn’t suck? Check out all of our coverage here.