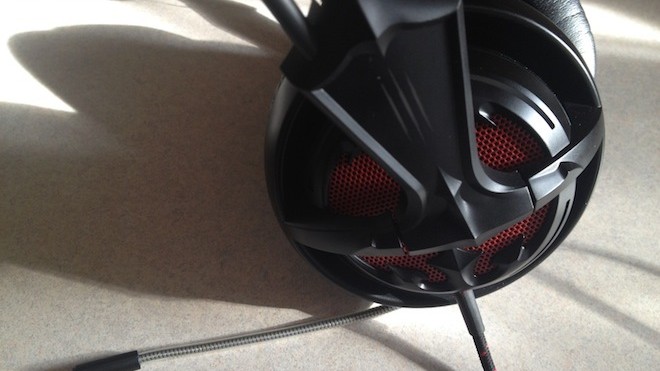 SteelSeries has made a name for itself in the high-end computer gaming market. The company’s latest release is a co-branded mouse and headset for the release of Blizzard’s Diablo 3 title. We got our hands on both of them, and took an in-depth look. Do they live up to the hype? Read on to find out.

This time, we’re going to take a look at the SteelSeries Diablo III Headset. At an MSRP of $119, it’s firmly in the market with some other high-end names like Razer, Logitech, Asus and Audio-Technica. To keep pace, it’s going to need not only great sound, but also some convincing features.

The first thing that you’ll likely notice when you take the D3 out of the box is the suspension design for the headband. Widely used by professional audio companies like AKG, this allows the headset to fit a wide variety of head sizes without the need to adjust the ear cups along a band as you would with most headphones. Instead, the headband is attached to wires which will, as you place the cups over your ears, allow the band to adjust to your head size automatically.

The D3 is a USB headset. There is a shorter (3 foot) cord attached to the headset itself, but an extension cable, providing an additional six feet of length, is included. Smartly, SteelSeries supplies software for the vast majority of its devices that is compatible with both Windows and OS X, and the D3 is no exception. As is common with SteelSeries peripherals, the attached cable is covered in a woven sheath, adding a bit of extra protection against snags.

Plugging up the D3, chances are good that your computer will automatically recognize the headset and treat it as one. If you want to get highly involved, though, you’ll need to do a software download from the SteelSeries website of the SteelSeries Engine. This singular piece of software will be the management hub for all of your plugged SteelSeries peripherals.

There aren’t many controls or settings for the headset, but you can choose to set an equalizer curve to tailor the sound to your liking. You can also adjust the illumination effect and intensity, because yes, there are LEDs all over this headset.

The company states that there are 30 LEDs, in total. As you can see, the ear cups have LED illumination, and there are three marks down the side of the band, representing Diablo 3, which light up as well. The LEDs don’t pulse to sound, but rather fade in and out at the rate that you specify in the settings. As such, they avoid being annoying, but you can choose to shut them off entirely if you want.

The D3 carries over the same retractable microphone that we saw in the Siberia Neckband for iOS. It’s a noise-cancelling microphone which, if you’ve ever heard someone in a Ventrilo server who didn’t have one, you’ll know why this is important. It does an admirable job of blocking out ambient sounds, but it has a bit less fidelity than I’d like to see, with sound close to that of a telephone headset.

Now, what really matters is the sound of the headset itself. First off, it’s worth noting that this isn’t a studio-quality headset. It sounds good, but don’t fool yourself into thinking that you’re going to do professional audio monitoring with the D3. Listening to music, you’ll likely find (as I did) that low frequencies are a bit over-emphasized while the sparkling highs that you might expect will be somewhat missing. 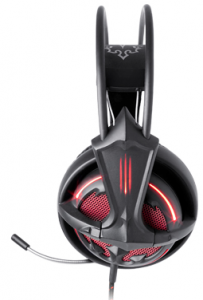 Fortunately the software-based equalizer does help matters, somewhat. It requires a bit of caution, though, as software-based solutions tend to clip easily and this one is no exception. Turn up one of the bands too high and you’ll be greeted with a crunchy, harsh sound in your ears.

Game sounds, conversely, are fantastic. With traditional high-end headphones, you tend to hear every imperfection in a game. Audible pops, stops and starts are common, because of the nature by which gaming soundtracks are stitched together. It’s a funny thing, but headphones and headsets with slightly-less accurate reproduction actually tend to sound better in games, because those imperfections aren’t as obvious.

In all, low and mid-frequency sounds are punchy, and highs are clear enough in game to keep all but the most picky of audiophile happy. I tested the D3 with World of Warcraft, Call of Duty 4 and Team Fortress 2. In every instance, I was well pleased with what I heard, and the audio lived up to what I’d expect from a headset in this price range.

An inline volume control, as well as microphone mute switch, keep the D3 on par with features that we’d expect to see. What really sets this headset apart, however, is its extraordinary comfort and light weight. The leather-padded cushions fit over even sizable ears like my own and the auto-adjusting headband removes the annoyance that you can find sometimes when you have ear cups that don’t fit quite right because of pre-assigned detents on other headphones.

Add the comfort and sound quality to the features like that retractable microphone and OS X compatibility and the SteelSeries Diablo 3 Headset is a winner. Yes, it’s pricey, but understandably so. I’ve seen cheaper, but not better. Conversely, anything better has cost far more. The Diablo 3 Headset is aimed at the hardcore gamer. For people who buy $100 mice and $400 graphics cards, $119 for a great headset is just another day at the office.