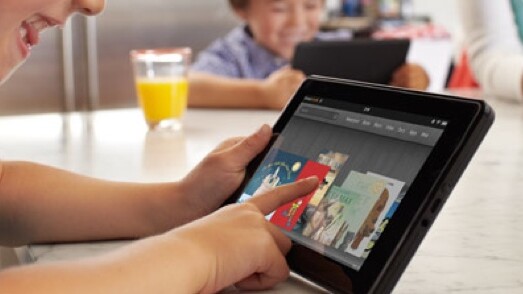 In an announcement, Amazon says:

“We’re thrilled to be able to ship Kindle Fire to our customers earlier than we expected. Kindle Fire quickly became the bestselling item across all of Amazon.com, and based on customer response we’re building millions more than we’d planned,” said Dave Limp, Vice President, Amazon Kindle. “Customers are excited about Kindle Fire because it is a premium product at the non-premium price of only $199.”

The US-only release sees the cloud-centric 7-inch tablet available to purchase here. At the time of writing, shipping time is displayed as ‘3-5 days’. It’s unclear whether this is due to first-day stock being entirely allocated or if the estimate will be updated to reflect the announcement. The Fire will face competition from Barnes & Nobles Nook Tablet. We’ve got a comparison of the two devices here.

In a separate press release, Amazon said it will be shipping its touchscreen versions of the classic Kindle in the US tomorrow – the WiFi-only version costing $99, the 3G alternative priced at $149.