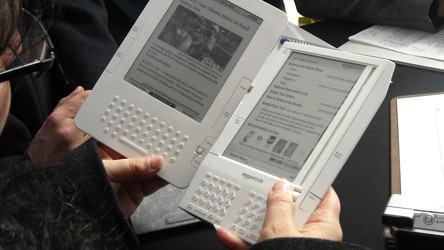 According to people familiar with the matter, Amazon has plans to release a tablet computer to compete with Apple’s iPad, reports the WSJ. The company will also release two new Kindle models, a touch-screen device and a cheaper model said to be an improved version of the current kindle.

The tablet will have a 9-inch screen, similar in size to Apple’s iPad, the sources said, and will run on Google’s Android operating system. The design of the tablet is being outsourced to an ‘Asian manufacturer’ and it will not have a camera. Unsurprisingly, the device is said to allow users to easily watch videos, read books and listen to music provided by Amazon’s various digital stores.

The two new Kindle devices will use the same e-ink technology as the current models. If the touch screen model is using e-ink, then it is likely that it will use an infrared touch technology similar to the Barnes & Noble Nook model released in May.

The possibility of an Amazon tablet has been discussed for some time now and many see it as the only company with a chance of rivaling the iPad in popularity. Our own Matt Brian has explored the possibilities of the Amazon tablet and narrowed down its chances of combatting the Apple tablet to leverage of its extensive music, movie and cloud products as well as its long history of retail success. Amazon has proved time and again that it knows how to sell, but with the Kindle, it has proved that it also knows how to ship a consumer electronics product.

With the weight of its extensive retail empire behind it, and the experience gathered from years of Kindle success, do you think that Amazon stands a chance of competing with Apple?