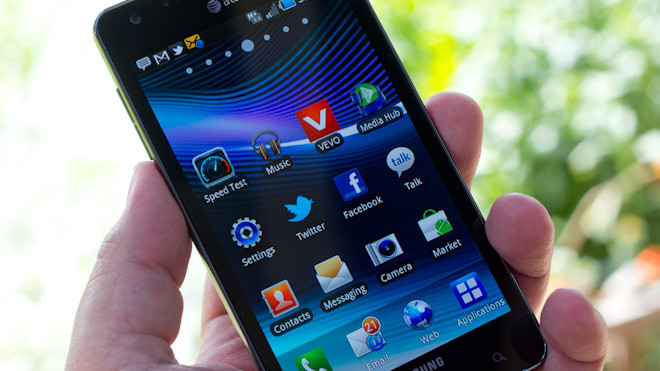 The first thing that you’ll notice about the Samsung Infuse is that the screen is enormous. The second thing you’ll notice is that it weighs far less than a phone this size should. With its Super AMOLED screen, solid performance and fantastic camera, the Infuse should be on anyone’s list of Android phones to consider as long as they can handle the bulk and the quirks that come along with the Android OS and Samsung’s TouchWiz customizations.

The Samsung Infuse 4G falls into its lineup just below the flagship Galaxy S II. It features the single-core Hummingbird processor running at 1200MHz and a 4.5″ Super AMOLED Plus screen running at 480×800. The Infuse has 16GB of internal memory with the ability to add up to 32GB more with a MicroSD card. The 4G in the name comes from the fact that it supports the HSPA+ standard, which AT&T considers ‘4G’, but more on that later. An 8MP front camera and 1.3MP back camera round out the major hardware features.

At just over 5″ long and less than 5 ounces, the construction of the Infuse is both large and light. The lightness is largely due to its almost entirely plastic frame, with the glass screen being the primary source of weight. The back panel is crucial to keeping the Infuse light as it’s a paper-thin piece of plastic. Thankfully, at only 9mm thick at it’s beefiest, it still manages to feel relatively sturdy in use.

The size of the screen did have a bit of an impact on usability, at least for me. Because of the sheer size of the phone, it’s hard to pocket if you’re not wearing baggy clothes. It’s also difficult to reach across the screen with your thumb when using the phone one handed. I found two-handed operation to be a much easier and more comfortable prospect. If you’ve got fairly big hands you’re probably going to be OK but anyone else should be aware of the size.

The front of the phone is dominated by the huge screen, with a relatively tasteful silver AT&T logo and Samsung branding framing it on top and bottom. I love the fact that the speaker grille protrudes from the front of the phone slightly. This eliminates a lot of the ‘lint trap’ problems that inset speaker holes like the iPhone tend to have. A front camera and sensor ports are tucked into the upper left corner.

Along the bottom of the front edge are the stock touch-sensitive Menu, Home, Back and Search buttons that you use to navigate the Android interface. These all felt very responsive in my testing and rarely did I have to tap one twice, although the OS is a bit erratic in how it lights them up for use; I did find myself hunting for the correct button in dark conditions from time-to-time. While watching video in landscape mode I managed to pop them once in a while with the heel of my hand but that may just be my meaty palms.

The back of the phone is pleasantly textured and finished in a chromium color that gives it a retro vibe. The speaker placement could have been better as it ends up landing right where you hold it in your right hand when in portrait. Even so, it is loud, far louder than the iPhone or the Samsung Captivate for instance.

The camera and flash are positioned near the top on the back. The flash placement looks odd at first but makes more sense when you think of it in terms of holding the phone sideways like a ‘regular camera’. The noise cancellation hole at the top and the mic hole at the bottom are small but call quality was very good across the board so no real complaints. The noise cancellation seemed especially good on the Infuse, with background noise never becoming an issue.

Next: Performance, battery and camera.

Despite the Infuse 4G being a lower-powered device than its higher-end relative, it felt very snappy throughout my testing. The telltale signs of lag, wacky page zooming and other ‘features’ of Android 2.2.1 are all there, but it’s hard to blame Samsung for that when it’s clearly a failing of the OS. An upgrade to Android 2.3 would be welcome and likely yield speed performances but, as with many AT&T Android offerings, the updates come directly from AT&T’s servers and one is not yet available.

Aside from quirks of the OS though, scrolling was smooth and running 5 or 6 apps at a time didn’t make it flinch. At one point during my testing I had to travel out of town and the Infuse ran Google Navigation, Music, Twitter and the standard email apps all at once with no issues.

The resolution of the screen puts it just north of 200 dpi, which is a bit disappointing given how many 300+ dpi phones are out there now. This means that at a standard viewing distance there is still a fair amount of aliasing. This isn’t helped by the fact that Android’s text smoothing is not all that hot, but once again that’s a problem of the OS. Aside from the resolution though the screen is absolutely gorgeous with vivid color and punchy blacks. The Super AMOLED Plus technology really shines with photographs and the interface looks great as well.

At maximum brightness it’s still not as bright as the iPhone 4 but most people never use it anywhere near that. With the display settings left at the standard ‘Auto Brightness’ settings and the power saving mode turned on, the screen tends to fluxuate a lot in brightness; I’d recommend turning those off and putting it on slightly less than 50% brightness for a more consistent experience. If you don’t mind the up-and-down of the auto power settings then you’ll probably get a bit of extra life out of the battery.

In general, the life of the 1750mAh battery was very good. I consistently got 9-12 hours of use out of the phone with normal activity. For my stress test I charged it to full over night, used it for all of my Twitter and email work that morning, GPS guided a 3 hour drive using Google Navigation with Twitter, email and music running and still managed to get a good 7 hours out of it.

The 8MP rear camera of the Infuse is absolutely fantastic. It’s one of the best I’ve seen from any Android phone and it easily rivals the iPhone 4. The colors are bright and saturated without going overboard. Sharpness and detail are all in the 90th percentile for a camera phone. Indoor performance was typically poor, as it is with most phones, but very good compared to many other current gen phones. The flash images were universally terrible but I have yet to see any phone produce a decent one.

The 720p HD video was similarly good with a crisp, brilliant image that handled highly saturated colors just fine. I found that it did have a tendency to clip highlights as you can see in the sample above but it wasn’t too much of an issue. It produces an image that is easily as good as a similarly priced pocket HD camcorder like the now-defunct FlipHD.

The Infuse 4G also comes thoughtfully packed with a microUSB-to-HDMI adapter, but the adapter requires that you plug the phone’s power cord into it as well, making it cumbersome to use. The quality of the video out is decent, with little lag, but the resolution wasn’t the best on my 46″ screen with a fair amount of aliasing and pixelization. Playback was smooth though and music videos from Vevo looked fairly decent and games would be fun to show off to friends.

About that 4G speed

The Infuse carries a 4G label but that doesn’t mean that it’s a true 4G phone. It does have the ability to utilize the HSPA+ network, which is what AT&T’s marketing department has deemed 4G. The general consensus with 4G is that an LTE network supporting up to 45Mbps is what truly classifies it, and an LTE phone like the Droid Charge deserves that designation. The Infuse gets it nonetheless, even though it’s limited to the 21Mbps max HSPA+ spec.

In my testing with the Infuse I found that AT&T’s network gave me significantly less than this, maxing out around 4Mbps and averaging around 3.5. This is still far faster than the 1.5-2Mbps average that I got side-by-side with an iPhone 4. So it’s fast for sure, but just don’t go expecting true 4G speeds on AT&T’s current network. Your speeds may vary of course but I’m in a fairly high-signal, low traffic area.

The Infuse 4G is packed with the same TouchWiz customizations that the Galaxy S line is, although it uses the older 3.0 version of TouchWiz, not the newer 4.0. This means that you get Samsung’s customized icons and layout as well as a bunch of other ‘improvements’ like a Samsung keyboard, black mail app and Widgets that take up whole swaths of precious home screen space. I’m actually a fan of the look of the icons and other aspects of TouchWiz over the stock Android look myself.

I quickly switched away from the Samsung keyboard as it has this annoying flutter that is created by the auto-correct bar showing and hiding while you type. It’s quite distracting and gave me absolute fits. There is also a Swype keyboard if you’re a fan of that sort of thing.

Because it’s an AT&T device you get some of the custom AT&T apps like Navigator, Code Scanner, Live TV and FamilyMap. I prefer the standard Google Navigation app myself but it’s nice to have two decent choices bundled with the phone. The Infuse 4G is the first AT&T device to explicitly allow loading of apps from outside the Android Market. A quick trip into the settings menu to tick the ‘Unknown sources’ option and you can sideload applications to your heart’s content.

The default browser isn’t very good. I got plenty of hangups, the text rendering is poor and the zooming is especially awkward and ugly. I recommend you pick up an alternative like Skyfire or Firefox from the Market immediately. It was pretty darn quick when it did work, as is most of the phone. The UI almost always felt responsive, apps loaded quickly and ran well, even when 4 or 5 deep. The lower speed of the single-core CPU doesn’t seem to have hurt it much.

The Infuse 4G is a good example of solid, well executed hardware being held back by immature software. If you’re used to Android’s quirks, you probably won’t be too put out by them here, especially as the hardware has plenty of muscle. The fact that it’s still stuck on Android 2.2.1 isn’t too surprising because only a handful of new devices are running Gingerbread, but it’s disappointing nonetheless.

The cheaper feel of some of the construction may put off some fans of the more solid Droid hardware out there from Motorola but if you want the biggest, brightest screen on the market and don’t mind running a slightly older version of Android, the Infuse 4G is a worthwhile option for you to consider.

The Samsung Infuse 4G will be available from AT&T for $199 starting May 15th.