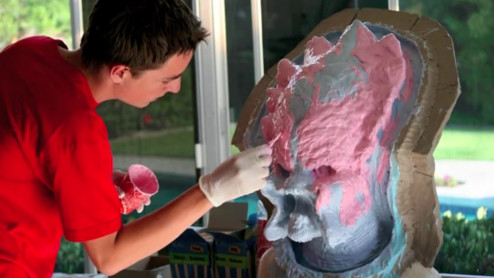 I’ve tried a few different solutions over the years for streaming Internet radio through my house. I’m a big fan of music in the shower, for instance, but my phone’s speaker is never beefy enough to hear over the sound of my Kohler. The obvious other answer is to pipe sound to a home stereo via an attached computer, but that’s far less functional than it may sound.

WiFi radios are far from a new thing, and they’re actually getting pretty good as time moves on. The latest one that I’ve tested is a device from a company called Grace that features dedicated controls for your Pandora pleasure, on top of many more features. You can program favorites, catch the weather and even add terrestrial radio stations that have online streams.

Sound quality is passable, though far from the best that I’ve heard out of a desktop system. If you’re looking for massive, room-filling sound, this isn’t your radio. If you want a solid piece to set on your desk or the kitchen counter, read on.

First off, it’s worth mentioning that the Grace radio’s interface is clunky. Firing it up, you’re asked to enter your WiFi network and the corresponding network key. Have a 28-character key? You’re going to hate the fact that you have to scroll through a menu that reads like this:

Painful scrolling aside, once you’ve set up your key, you shouldn’t have to do it again.

The menu system is somewhat equally as unnerving. Again, you have to use a scroll wheel to sort through the options, then press it to select them. Though the internal system of the Grace does an admirable job with searches, it’s not perfect. If you really want to program some favorite stations, there’s a better way.

Heading to the Grace-branded page from Reciva will allow you to register your radio, then add stations via a computer interface. That interface isn’t great, but it’s far better than doing so via a scroll wheel.

After you’ve gone through the somewhat odd process of adding in your streams, life should be pretty grand. The Grace does a great job of finding other stations, based on your search preferences. It also has a handy integration with Live365, Rhapsody, mp3Tunes, Aupeo and Sirius. You can even choose to listen to podcasts on the radio, if you’d like.

Of course, the bigger story is Pandora.

The radio’s Pandora integration is really very good. You’ll need to set it up via the above-stated website, but once you have, you’re able to pull in your Pandora stations, create new ones and thumbs up or thumbs down a song. Really dislike it? Just skip it with a dedicated button.

There’s a remote control included. It’s probably not the worst one you’ve ever used, but it’s likely not the best. Its off-axis ability is fair, at best, and the buttons are a bit difficult to push. Beyond that, though, it’s at least good enough to use at your desk, while the radio is on the other side of the room.

I have a couple of other, rather minor complaints. I’d love to have seen a battery option, so I could take the thing out on my deck. Instead, I just have a fairly blank panel in the back with a power adapter and auxiliary output connection.

The interface needs some serious work. Though they’re probably not going to change the scroll wheel, I’d sure like to have seen a small touch screen. It would have made things considerably easier. Granted, it also would have increased the price, and that price is a selling point for the Grace.

MSRP for this model is listed at $169. For that price, I’d want the touch screen. Knock $30 off of that and I’ll make due with a somewhat less classy interface. The good news? That’s exactly what has happened. You can pick up this model on Amazon for just shy of $130, making it nearly a bargain.