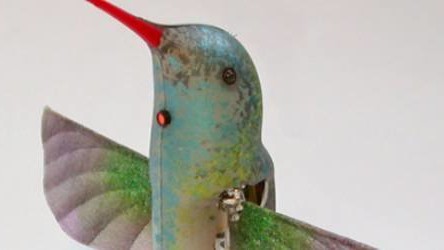 The surprisingly beautiful and biologically respectful robotic hummingbird can fly indoors, outdoors and could be the future of reconnaissance and surveillance missions in urban environments.

The Nano Hummingbird hovers, even in wind gusts up to 5 miles per hour, and for up to 8 minutes with no external power source. It can move from hovering to as fast as 11 miles per hour in forward flight.

A pilot operates the Nano Hummingbird with a remote control or while looking at its live video imaging stream. I imagine a future hummingbird bot cruising through middle eastern cities picking conversations and images like human spies never could. See the Nano Hummingbird in action below.