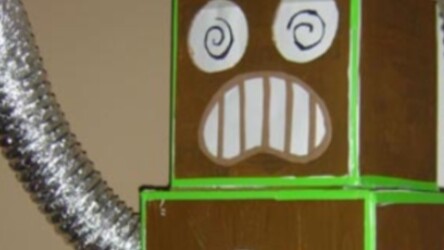 Roboticists are applying the way we learn to walk as humans to robots, hoping to improve their movement and behaviours by enabling them to change their form as they learn to move.

Just as babies learn to crawl before they walk, a new line of robots at the University of Vermont are able to walk by learning from successful movements. This happens because their unique design makes it possible for them to change form as they learn to walk. In the study, the robots wear a brace that gradually tilts their body and bends the legs, while the robot’s controller searches for successful movements. The robots begin in a crawl-like state and squirm around like a lizard on floor until they can figure out how to properly walk.

They have lots of moving parts. And their brains, like our brains, have lots of distributed materials: there’s neurons and there’s sensors and motors and they’re all turning on and off in parallel.. -Josh Bongard

Josh Bongard, leading the study on these evolving robots, is a roboticist at the University of Vermont. He released his discoveries earlier this month to the online edition of the Proceedings of the National Academy of Sciences.

Bongard’s work, funded by the National Science Foundation is aiming to produce robots that will perform simple tasks with the ability to be adaptable in unstructured or outdoor environments. And instead of programming the robots the traditional way, the team at UVM are creating computer programs to help them develop the desired behaviours, while equipping them with tools to change their body. Bondgard says the reason this hasn’t been done before is because “it is really hard to change a robot’s body… it’s much easier to change the programming inside its head”.

Bongard thinks there are two main issues that prevent us from having robots in our homes (your iRobot doesn’t count) or assisting us outdoors in environments such as a construction sites. The first reason is limited battery power and the other is intellectual. As Bongard points out, we can build machines that do the same things over an over but what happens when you take them outside? The real world is unpredictable.

If we could design intelligent robots to sense what is going on around them coupled with the ability to move and adapt to environments, we’d be able to build things cheaper and on a larger scale, Bongard mentioned on a recent science podcast.

This study first tested the concept out with computer simulations. Using 3D environments the virtual robots were put through numerous experiments using a genetic algorithm. The algorithm tested out various motions until the reptile-like robots began to slide and slither across the surface.

The working ‘physical’ robots are simple prototypes that were used to prove that the 5000 simulations that the team ran in 3D, could also work in the real world. These evolving robots were created using LEGO Mindstorm kits and are helping us move one step closer to having intelligent robot servants.

We built a relatively simple robot, out of a couple of Lego Mindstorm kits, to demonstrate that you actually could do it..This physical robot is four-legged, like in the simulation, but the Lego creature wears a brace on its front and back legs..The brace gradually tilts the robot.. so that the legs go from horizontal to vertical, from reptile to quadruped.