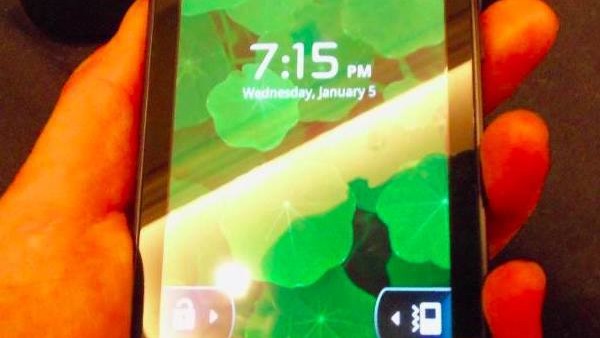 Finally an Android phone from Motorola that doesn’t feel like I’m carting around a dictionary! Motorola’s latest star Android phone is the Bionic 4G. As one reporter put it aptly, “Motorola! You’re back!”

The Droid Bionic is a dual-core, Cortex-A9, NVIDIA Tegra 2 based phone with a 960×540 screen that is just a little bit thicker than the Droid X because of its LTE capabilities. Still it doesn’t feel as bulky and it is in fact lighter than its Droid predecessors because it shed the sliding QWERTY keyboard.

The screen resolution is gorgeous making playing games or watching videos in full screen mode an absolute pleasure. The phone is smooth and fits in my back pocket. The Bionic also has Motorola’s full suite of apps, including Motorola’s enhanced Exchange functionality and social networking widgets.

The smartphone has an HDMI output port and is meant to dock. “It’s like a mini computer,” explained the rep. He then showed me how easy it is to hook it up to a TV monitor.

The phone will be sold through Verizon and pricing will be competitive with other smartphones in its league. Android lovers, line up, your new phone is here.

Next I had the pleasure of playing with the tablet that everyone is talking about this year at CES– the Motorola XOOM. XOOM, which we wrote about yesterday, is the first device to incorporate Android 3.0 Honeycomb, Google’s new operating system developed specifically for tablets. The Motorola XOOM’s 10.1″ widescreen is HD optimized and the clarity is beautiful. The tablet includes a fully functioning HD camcorder and a 5MP camera to view and edit videos and photos immediately. The speed is astonishing. It’s sexy, slick and looks exactly like a black iPad but feels a bit heavier in the palm. The device will launch as a 3G/Wi-Fi-enabled device in Q1 2011 with an upgrade to 4G LTE in Q2. When asked about pricing, the rep said it would be competitive with similar tablets and to “ask Verizon.”