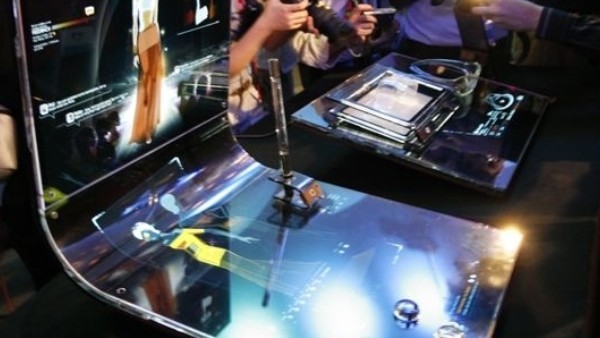 The following gadgets aren’t on the market yet but if you’re attending CES 2011 next week, you’ll have a chance to get a  peek at a few of them. In no specific order, here are some goodies expected to come out next year. Oxygen Audio will be releasing a new car entertainment system that fully integrates with your iPhone.  With this new product, the iPhone slips into a small dock and fits into the front, turning it into the system’s interactive faceplate. Oxygen Audio currently offers a few car stereo apps in the app store so we’re assuming the Oxygen O series will also be coupled with the same or newer user-interface app.  The O series line provides access to the iPhone’s entire iTunes collection, hands free calling and access to apps such as GPS, Google maps and Sirius/XM Satellite Radio.  Oxygen claims that while connected to the system, the device will charge the battery and allow users access to any app aside from the aforementioned titles.

ElectroHub is a new charging station that will offer compatibility for a huge amount of devices including the TV remote, toys and smartphones.  Similar to the Powermat chargers, ElectroHub requires additional add-on cases to make your smartphones compatible although it will charge tons of other gadgets with its use of AA and AAA batteries.  It will charge up to six devices at one time (including smartphones) and works by replacing a gadget’s original AA & AAA batteries with ElectroHub branded batteries. By doing this all of your AA & AAA supported devices will become compatible. Overall, ElectroHub supports lots of gadgets, a handy tool if you’re juggling multiple gizmos that require AA/AAA batteries; remotes, digital cameras, toys etc.

The LG Optimus 2x will be the world’s first dual-core smartphone and will be running Gingerbread (Android 2.3) when it’s released. We’re expecting this phone to be crazy snappy with a 1GHz dual-core processor and Nvidia Tegra 2 chip. The display is 4 inches, will play full HD video and has HDMI mirroring for output to a bigger screen.

Under the hood, the Optimus has a 1500mAh battery, 8GB of memory with the option to expand up to 32GB. It also has accelerometer and gyro sensors with both a front (1.3MP) and back facing (8MP) camera and LED flash. And, we expect it to record in 1080p. All in all, this device looks pretty sexy on paper. Engadget released a short video of the device below.

Elliptic Labs is demo-ing their ultrasonic touchless input technology this year at CES and it looks super cool. It’s similar to the technology built-in to Microsoft Kinect that allows users to execute actions without physically touching the device or a controller. This isn’t the first time we’ve seen these type of concept-demo, however, we might be seeing the touchless technology actually integrated into a lot of devices in 2011. Elliptic Labs will be showing off their touchless gesture user interface on monitors, tablets, iPad docking stations and stand-alone USB devices.

Elliptic Labs is creating new and intuitive ways of interacting with computers. We want to bring the user closer to the device, focusing on the user experience when designing our solutions. By combining expert knowledge from multiple disciplines, such as signal processing, consumer research and interaction design, Elliptic Labs seeks to develop unique and human-centered interactions. -Elliptic Labs

From what we’ve seen of the design from the leaked videos, this device may be packing some serious fun for gamers although there hasn’t been much info released yet. Gamers will likely be able to download gaming apps from the PlayStation library and will possibly get some nifty integration with Sony consoles. As we mentioned in an earlier post, “It is thought that Sony Ericsson will be using its established Bravia brand name from its high-quality flatscreen TV’s” This will be a device to watch in 2011. The prototype has a PlayStation app and seems to be running Android Gingerbread OS. The iPad rumour mill is now completely full, and from what we’ve heard, the new specs sound great. Based on the rumours, the newest iteration of the iPad will sport both a front & back facing camera, a lighter & smaller body, USB ports, a newer display technology and a new 3-axis gyroscope.

If that doesn’t sound sexy enough, versions may be getting CDMA support opening the options up for more carriers. The latest news released today, stated that Apple may be answering our prayers with a new anti-smudge treatment. It’s probably my biggest complaint with the iPad, the constant wiping of the screen is somewhat annoying and kinda gross. Along with the anti-smudge treatment, there may also be an anti-reflective coating that aims to reduce the glare in direct sunlight.

If your main method of communication is email and Twitter, you’d be better off with a data-only device like the new Samsung Galaxy Player. This device is a paired down version of the Samsung Galaxy S minus the phone and with more of an emphasis on the music player.

I’m one of those people who removed the phone icon from my dock and replaced it with email and Twitter so I’m personally a fan of devices exclusively for data nuts. The Samsung Galaxy Player has a Micro SD slot, 4inch Super AMOLED display, 1Ghz processor, front & back facing camera and runs on Android 2.2. It will also comes in 3 flavours; 8GB, 16GB or 32 GB. Apple fans are dying to get a peek at the new MacBook Pro likely slated to be showcased in April. As we mentioned, we’re expecting the new MacBook Pro to drop the standard hard-drives and move to SSD (solid state drives), possibly even giving users a bump up in storage. There’s also another juicy rumour that Apple will be adding a new high-speed connection type; Intel’s Light Peak. The new technology (Light Peak) will give users a super fast way to transfer data. Based on the information we have on Light Peak, transfers can get up to about 10 GB per second bi-directional. And, like we’ve seen in the new Macbook AIRs, going to the SSDs means more room for batteries and additional goodies. LG has designed a tiny 3D TV that appears to be approximately the size of an iPhone, and is LG’s smallest 3D TV in the line up. While we don’t have much information on it now, we do know it will be powered by a LG2161R MDTV chip with NRT (non-real Time) technology, and its display will be in 3D. Based on the pic, LG’s mini 3D TV also sports an external retractable antenna.

LG has said the device will be able to receive 3D TV broadcasts — even while flying down the freeway in your Lamborghini. LG’s new device will receive a 3D broadcast while users are moving at speeds of up to 200/km per hour. This means your daily commute on the subway just got way cooler.

Nintendo brings gamers the 3D experience without the use of corny 3D glasses. This new 3DS will come with six augmented reality cards, a touch pen, 360 degree trackpad, 2GB SD card, WiFi and gyro & motion sensors along with a 0.3 MP camera. It looks similar to past versions of the Nintendo DS however the 3DS will reportedly stream 3D TV. Sweet!

Games will be downloaded from the 3DS Virtual Console but will also work with DS and DSi cartridges. I’ve never owned a DS but the idea of downloadable games and 3D TV makes this device really appealing. We should note that Nintendo recently warned consumers that children under the age of six should not be using its 3D technology, in fact they won’t even allow children under 6 to try their demos. Kids under six can however play the device in 2D.

What new 2011 gadgets are you most geeked about? Please let us know in the comments.