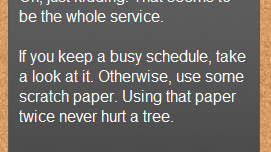 The world of point-and-shoot digitals continues to be anyone’s game. With solid offerings from at least 10 different brands, a camera has to really be something special to stand out. When we heard about Kodak’s social media-enhanced camera, we thought that it was absolutely interesting so we wanted to get our hands onto one.

In theory, the M590a is a beautiful, 14 megapixel point-and-shoot. In practice, it’s a great camera that has some usability problems. First, here’s a run-down of the features, from our original post:

Fortunately, everything that is mentioned in the features works exceptionally well. It really is slim and sexy, very pocketable to say the least. The rub of the whole situation though is that the facial recognition, as well as the social media sharing, are all based on the desktop software instead of being native to the camera itself. We do love the photographs that it takes. They’re rich, the camera has a myriad of different scene selections and there’s just about anything you can imagine that is covered in them. What is frustrating about them, though, is that the camera went for simplicity in buttons and instead ended up with complexity in menues.

The software itself, as we found with the Kodak All-in-One that we reviewed a few weeks ago, is solid. It’s frustrating, however, that Kodak has a camera with an MSRP of $200 that didn’t simply include a built-in WiFi ability for the one-touch uploads. Because of the process by which you upload photos, it ends up being more like a 5-touch upload, which isn’t necessarily much easier than just manually sorting your photographs.

We noticed some of the same issues that reviewers on Amazon had seen, as well. Photographs were generally very clean and clear in both widescreen and 4:3 modes. However, for some odd reason, photographs taken of objects focused around 10 feet away would sometimes end up blurry for no explainable reason. A second photograph would often times be just fine. Video, both in SD and HD however, always seemed to come out stunningly clean.

So where does all of this information leave our verdict? The M590 is  very capable camera. Maybe it’s too capable. It could do with a slimming of options but a gaining of features. If it had included WiFi for true one-touch uploads, we’d be in love. Since it uses a Micro-SD card, an Eye-Fi isn’t an option. It also needs to charge off of the USB cable, instead of having to use the USB to household adapter.

At this price range, it’s a solid contender. Presently the M590 is selling on Amazon for just short of $150. In that same range, there are solid offerings from Canon, Nikon, Sony, Panasonic and many others. It’s a crowded market and we have a hard time recommending the M590 without reservation. Essentially, it comes down to this – if you want a sexy, slim camera and somewhat-easier social media sharing, then the M590 needs to be on your radar. If you want the best quality, easiest-to-use camera, there are probably better choices.