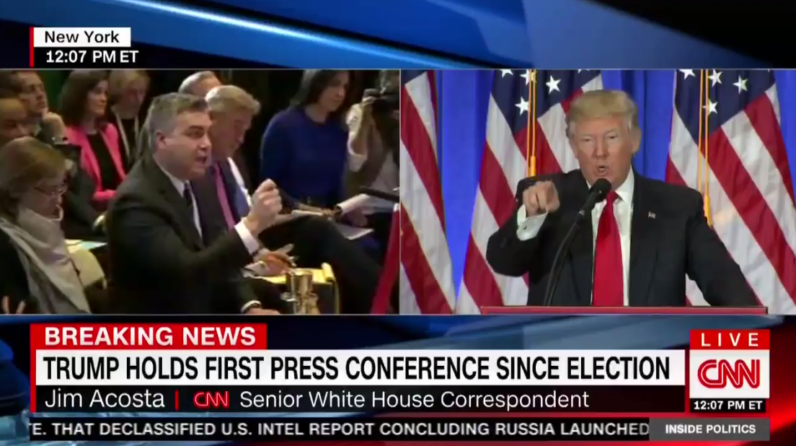 President-elect Donald Trump today used his first press conference since the election to blast CNN reporter Jim Acosta and cast more doubt on traditional media outlets. As Acosta attempted to ask a question Trump quickly shut him down, saying he wouldn’t “give him a question” before calling his outlet “fake news.”

Trump shutting down CNN reporter trying to ask a question: "Don’t be rude… you are fake news" pic.twitter.com/O4z3pPYdXp

Trump’s comments came after both Buzzfeed and CNN published reports yesterday that a British intelligence official had compiled memos indicating Russia had been “cultivating, supporting and assisting” Trump for years. It also claims The Kremlin has compromising information on the President-elect. The dossier is a series of unverified — and potentially unverifiable — claims that Trump aides remained cozy with operatives and benefited from a steady stream of intelligence originating in Russia.

And then the documents gets a little weird.

However, there were other aspects to TRUMP’s engagement with the Russian authorities. One which had borne fruit for them was to exploit TRUMP’s personal obsessions and sexual perversion in order to obtain suitable “kompromat” (compromising material) on him. According to Source D, where s/he had been present, TRUMP’s (perverted) conduct in Moscow included hiring the presidential suite of the Ritz Carlton Hotel, where he knew President and Mrs. OBAMA (whom he hated) had stayed on one of their official trips to Russia, and defiling the bed where they had slept by employing a number of prostitutes to perform a ‘golden showers’ (urination show in front of him.

The dossier claims this, along with other evidence, was gained through the use of concealed cameras and microphones in all the main rooms of the hotel.

Buzzfeed published the document in its entirety. CNN, on the other hand, chose to omit the bulk of the document and instead focus on key pieces it felt could be substantiated. Lumping the two together sets a dangerous precedent.

It’s easy to argue Buzzfeed could have withheld the unsubstantiated document; others — like Mother Jones — had done so since at least October. It’s also fair to claim that predicating an unsubstantiated report on the fact it’s unsubstantiated, thereby leaving the public to form their own opinion, is fair game.

If you want to talk ethics in journalism, it’s best to start at the beginning: it’s the journalists job to disseminate information in the public interest, not to withhold it for months while attempting to gain a stronger foothold. The authenticity of the dossier, remember, isn’t being called into question. It exists. It’s existed for months. High ranking politicians are aware of it and have even discussed its contents. The mandate to publish the document is essential to any notion of a free press.

Unless information comes to light proving one of these two outlets created the memo for the sake of publishing a sensational story, it’s legitimate news that falls in line with the public interest. Ideally you’d fact check, substantiate, and attempt to confirm the information, but the world we live in doesn’t always allow for complete certainty. At the end of the day a reporter is a detective; and even the best detectives sometimes get it wrong.

Reporters pick a path based on the information available and hope like hell they chose correctly. And Buzzfeed, I would assume, did just that. This isn’t new media stuff; it’s how journalism has always worked.

Combining the two approaches, though, creates doubt in the mind of the people. Now, the two outlets are forever linked regardless of choosing very different reporting methods. To Trump supporters, both are now sources of fake news. In those that understand media, they’re two different methods of reporting — neither of which fall under the fake news banner.

This is, unequivocally, manipulation. By casting doubt, Trump undermines mainstream media and forces people into the dark corners of the web where more favorable — and often false — stories exist. The rise of ‘fake news’ isn’t based on the fall of traditional journalism, it’s caused by a shifting narrative that sees a public more interested in ever than finding news that fits with their individual ideologies — facts be damned.

And now that fake news is on the tips of everyone’s tongue, it’s easy to throw the phrase around as a catchall to include: news you don’t agree with, news that subsequent intel proved to be incorrect, or just the occasional slip that sees even the best media organizations occasionally get one wrong. Throwing around the term cheapens its impact, especially since we have actual fake news to worry about — stories that were created out of thin air for the sake of clicks, revenue, and attention.

This is the important part to understand: to constitute fake news, a story must first be false. Publishing information of unknown truth doesn’t mean it’s incorrect even if you disagree with with how it was disseminated. It’s no different than Wikileaks publishing unfiltered information, or a trial attorney presenting evidence — as long as the evidence hasn’t first been proven false, it’s fair game and arguably in the best interest of the public to unearth it.

If ‘clickbait’ was the rallying cry for those that didn’t understand journalism over the last decade, ‘fake news’ is undoubtedly here to take its place for the next.

And to borrow from Trump’s lexicon, that’s just sad.

Read next: Pre-orders of Nintendo Switch begin Friday but you probably aren't getting one