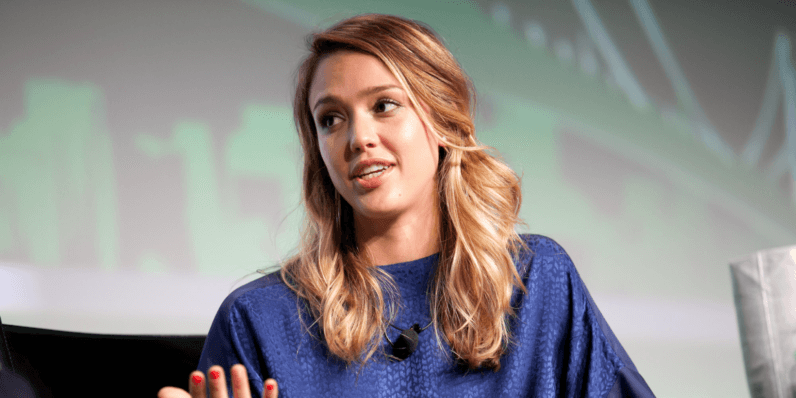 The shortage of women in tech is troubling. What’s more troubling is a woman, in tech, trying to keep women out of tech. Sadly, that’s exactly what Gizmodo’s Sophie Kleeman did with her recent piece titled ‘Apple’s Decision to Cast Jessica Alba in Its Reality Show Is an Outrage.’

But now, as other fine minds in tech blogging point out, the people in charge have gone and ruined it by casting Jessica Alba as a mentor to app developers. You know, Jessica Alba? That lady you might recognize from the posters hanging on your dorm room wall in 2005?

Reducing Jessica Alba to a poster is insulting.

It was Alba, after all, who started a lifestyle company that’s now approaching a $2 billion valuation — The Honest Company. Even the “fine minds in tech blogging” the piece linked to (not once, but twice), TechCrunch, took a softer and more sensible stance.

And yet, it gets a lot weirder when we talk about the eclectic cast of mentors behind the show. Gwyneth Paltrow, Will.i.am, Gary Vaynerchuk and Jessica Alba will all help the teams. Sure they’re all talented and famous. In Jessica Alba’s case, she’s even behind a huge e-commerce company. Becoming a big star like her is no small feat either.

But I don’t think any of these hosts are qualified to talk about design, engineering or even growth strategy when it comes to releasing a new app on the App Store.

The reality show takes a rather simple and unimaginative premise. Cameras are set to follow around founders while they attempt to navigate the shark-filled waters of Silicon Valley.

Not a single dose of vitriol was slung in the direction of Paltrow, another successful businesswoman and actress. Now that you mention it, I don’t see the same level of criticism for Vaynerchuk who — while amazing in his own right, isn’t coding apps in his basement — or Will.i.am,  another seemingly-odd fit.

No, it’s Alba that draws the ire. It seems the crime she’s committed was as simple as being attractive and smart enough to start a successful company.

It’s cool though, the piece isn’t sexist. It proved as much by rattling off the same list of entrepreneurs as TechCrunch did in its piece, in the exact same order. Gizmodo, though, didn’t bother to adjust the context when it referred to all of them as women.

Don’t get me wrong, I have nothing against women in technology, and let me throw out some alternative casting choices to prove it: Whitney Wolfe, Evan Spiegel, Anne Wojcicki, Kevin Systrom, Julia Hartz, Dennis Crowley, Emily Weissor, or Pavel Durov.

To be fair, Gizmodo isn’t alone in its criticism of the show, and the whole thing could be a tongue-in-cheek bit of social commentary.

It’s lacking app developers, which is obviously not ideal when the show itself is about apps. That said, each of these celebrities are uber-successful and should prove to be quality mentors as the entrepreneurs attempt to navigate both life and the Silicon Valley.

To add, I’d be amazed if the show itself focused on any level of the technical, a move that would essentially turn it into this, only with prettier faces.

It’s Apple, one of the most creative companies on the planet. If mentors need back up for the technical pieces, I’m sure they’ll be provided. Instead, these mentors are here to turn fledgling app creators into a full-blown businesses, something each of the mentors is uniquely qualified to do.

And then there’s the issue of visibility.

Apple’s move to hire recognizable names rather than startup founders that only a handful of non-tech people have ever heard of makes the show a viable option for those outside the Silicon Valley bubble. Alba’s appeal adds to this, and if you want to go really next level, could lead to young admirers watching the show that are tomorrow’s great female entrepreneurs.

But no — let’s be ‘outraged’ instead.