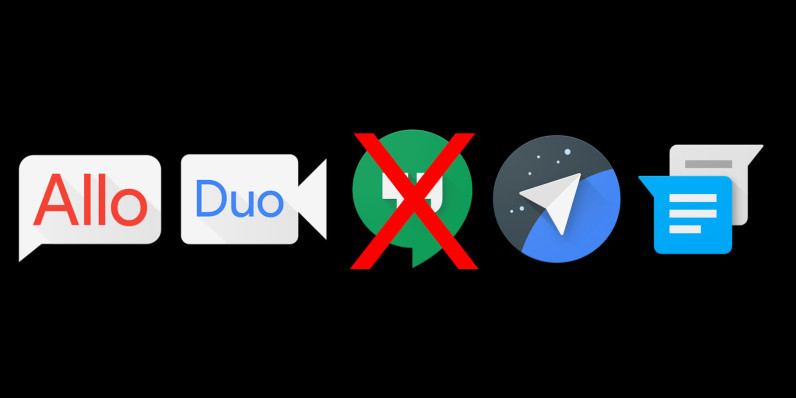 In case you haven’t noticed, Google has been busy lately. Among the plethora of news at its I/O conference, it launched three new communication apps in the span of one week: Spaces, Allo and Duo. They join the existing Hangouts and Messenger apps.

So here’s something of an obvious rant: Google does not need five chat apps. Heck, that’s six if you want to count YouTube’s new messaging feature. The IM market is already too congested, and each of Google’s apps have at least some overlapping functionality.

Don’t get me wrong; I actually like Allo and Duo a lot. There are a lot of original, useful ideas in there. But they should have been a singular app, and they probably should have replaced Hangouts too.

Spaces is a bit more unique, but I’d also argue its group-oriented features could have been integrated integrated into single, great communication app that really stands out from the crowd. Instead, Google has since confirmed all its products will coexist for the foreseeable future. Sighs.

Granted, this is Google. The company’s M.O. has long been to throw products at a wall and see what sticks, because it’s capable and willing to fund a myriad of ideas.

That’s part of what makes Google so innovative, but it’s also exhausting. I already have to juggle Messenger (Facebook’s), Messenger (Google’s), WhatsApp, Snapchat, Skype, Wire, Telegram and Hangouts on a regular basis. And that’s not even counting the apps I’m regularly testing for work.

First World Problem acknowledged, but all I’m saying is some consolidation would be nice. After all, Apple only has iMessage for both IM and SMS, and that works just fine for them.

Hangouts was supposed to be Google’s all-in-one communication client, but then Google just stopped caring about it and literally told people to use Messenger for SMS instead. There’s very little Hangouts does that other clients don’t, and Google hasn’t even kept it at feature parity with its competitors. Three years after launching, you still can’t send video clips on Android.

In an increasingly crowded messaging market, Google needs to focus its portfolio, not broaden it. I say kill Hangouts, and slap its best features onto Allo. As long as Google keeps diluting its efforts, it’s new chat apps are never going to fulfill their potential.

Read next: How to turn your dopey idea into something great