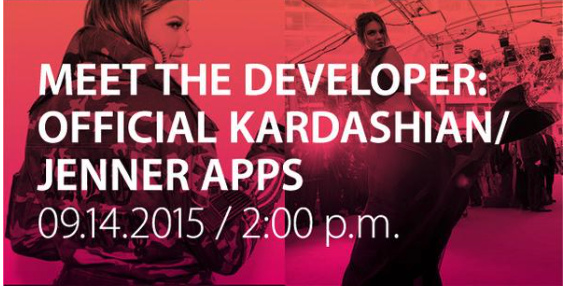 When you have an open invitation to ‘meet the developer’ at an Apple Store, interested parties might think it’s someone grinding hard in Xcode every day. Instead, devs in New York are getting the Kardashians.

They’re there to promote a new app with the Kardashian name all over it, and that’s cool; Kim’s app makes a shitton of money, so more power to her. People obviously love casual apps, and I’m happy she has made her way to iPhones all over the globe.

There is NO SUCH THING as a Kardashian DEVELOPERS event. FML.

But ‘meet the developers’ is a really off. The Kardashian/Jenner ladies have likely never touched Xcode, meaning they never really developed the app.

Apple does a good job of intersecting culture and technology, but calling the Kardashians developers is a bit too far for me. It’s bad enough I have to navigate past Taylor Swift fanblogs to get answers to issues when I’m coding in Swift — now the Kardashians are making an appearance in iOS development, too.

Glu Games — who developed Kim’s successful app — hasn’t mentioned it would be in SoHo for the event, making me think it’s either not making this app (unlikely) or this one is more a promotional event than actual developer event (slightly bothersome).

If you want to show up and ask the Kardashians about auto layout or tuples, the event is happening right now. Please Periscope your interaction with them if you go; I’m dying to know their feelings on unwrapping optionals.

Read next: Twitter for the Web is down for many users [Update: We're back!]