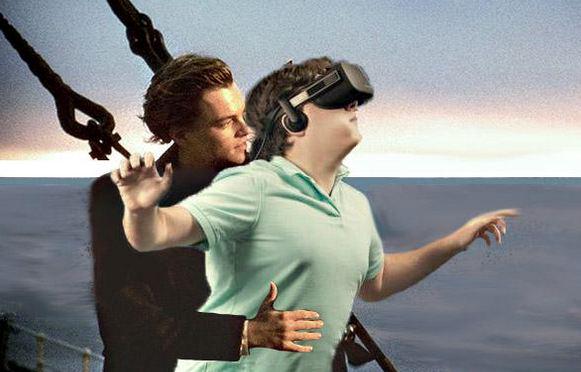 Today, Time Magazine released the cover of its latest issue, which includes a feature piece by columnist Joel Stein on the budding VR market. On it stands Oculus inventor Palmer Luckey, a 22-year-old self-taught whiz kid whose unrelenting enthusiasm for his product and his philosophy of not wearing shoes shoves him into the “quirky CEO” box.

There’s no question that the cover looks more interested in making Luckey a mockery rather than a visionary. His signature bare feet plain and visible for all to see, the large Oculus strapped to his head, and an awkward pose do a lot to show that Luckey is in his own world — perhaps one we still don’t understand.

So the Internet has done what the Internet does when dealing with overt enthusiasm over early or niche products: it pulled out Photoshop.

Luckey isn’t the first to receive this treatment — one obvious recipient of this behavior is former Google Glass enthusiast Robert Scoble, whose wife took a photo of him wearing the device while in the shower back in 2013. There’s also the eternal Steve Ballmer meme “Developers,” in which the former Microsoft exec is so jazzed about the 20th anniversary of Microsoft that he careens across the stage from one end to another.

I can understand if you find this funny, but in participating in the ritual pasting of these people on top of dinosaurs or with the body of a supermodel, I believe that we’re reinforcing the idea that early-adopting tech enthusiasts and inventors are worth ridicule just because they believe in what they’re doing.

I don’t know Time’s intention with the cover, but after thoroughly reading Stein’s piece I felt like he depicted Luckey as an overexcited borderline caricature, even pausing to smartly remark on his name. It read, at times, incredibly patronizing.

It echoes the look and feel of the magazine’s 1996  “Golden Geeks” cover, which included a barefoot Marc Andreessen and focused on how stunned Andreessen and other tech luminaries were about their newfound wealth. It casts more than a slight shade of doubt, and implicitly questions the sustainability of it all. It makes them, at times, seem like fools.

It’s not wrong to treat Luckey’s optimism with a skeptical eye, but by reinforcing how stupid he looks on the cover of Time, the audience is agreeing with Time’s viewpoint that Silicon Valley is full of a bunch of sniveling nerds. That they’re strange, are intrinsically out of touch with society, and should be shamed for not being normal.

So, maybe by picking on the easy targets, perhaps we’re really making ourselves the morons here.

Oh, and if you think the device just looks stupid, here’s a helpful reminder that it looks stupid on everyone.

➤ Why Virtual Reality Is About to Change the World [Time]

Read Next: Sorry Soylent dudes: After the revolution the clueless tech elite will be doomed