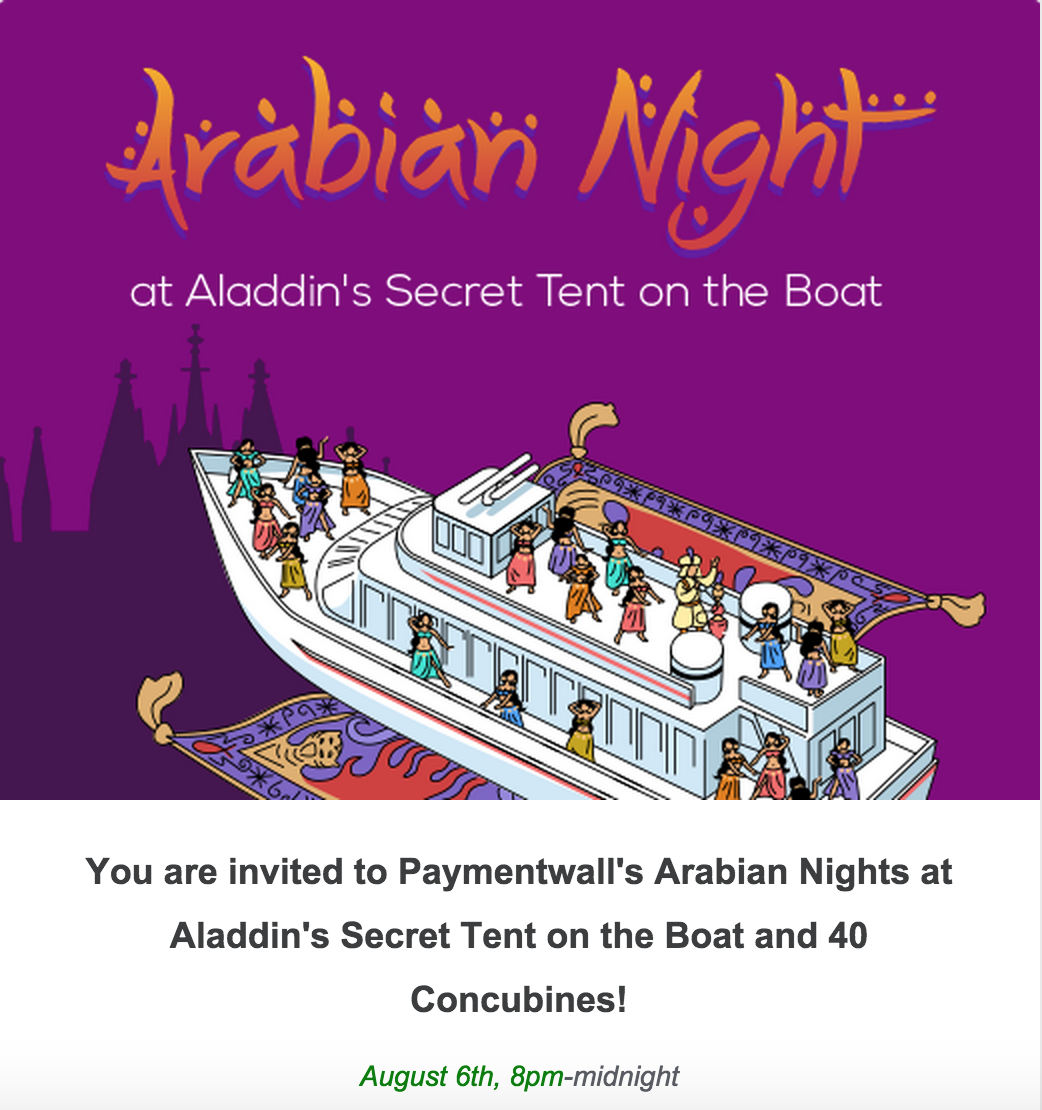 Gamescom is arguably the biggest and most important gaming trade show in Europe. A mix between E3 and San Diego Comic Con, Gamescom is open to the public and features booths from top names in gaming — Activision, Ubisoft, and Microsoft will debut their upcoming games this year, among others.

It’s apparently also home to a culturally insensitive, fratty cruise that promises you can mingle with “40 concubines.”

San Francisco e-commerce payment company Paymentwall is promising a night of debauchery on a boat sailing upon the Rhine in their fourth annual cruise, themed “Arabian Nights.”

My editor Martin Bryant was asked to attend, and passed the invite over to my stone-cold, unblinking face.

Paymentwall promises, “Sherbet served by belly dancers, Shisha and Arabian delicatessen accompanied by Arabic rhythms,” along with the promise of those 40 concubines. It sounds like the same kind of schlocky, prejudiced representations of Middle Eastern cultures that would be found at a frat mixer — or the “not a good idea” pile of animatronics from Disney’s It’s a Small World.

Oh, and women. Did we mention the women? Women will be there.

And just in case you think that the insensitivity is an isolated incident, Paymentwall’s previous cruise, a ninja party themed “Big in Japan,” offered “drinks & sushi served by Geishas, karaoke performances, dancing Ninjas, and Godzilla taking shots of sake.”

I cannot feel my eyes, for they have rolled so far they are stuck in the back of my head.

A blow-out party mocking minorities and featuring half-dressed women in company-described subservient roles during a gaming conference is not just woefully backward. It perpetuates the idea that the games industry specifically caters to men in harmful and generally awful ways.

International conferences are no strangers to offering up hot girls for consumption — Russian telco CBOSS was kicked out of Mobile World Congress in 2012 for providing scantily-clad escorts for attendees.

But the continuation of this practice puzzles me. The games environment is changing, and this event seems like the worst of games trade show culture in one four-hour extravaganza.

According to a 2015 report by the Entertainment Software Association, the gender demographics are edging towards parity: 44 percent of respondents identified as female, while 56 percent identified as male. As gaming becomes more mainstream, with more people embracing social and casual gaming, I find it disheartening that Paymentwall’s event turns women and people of color into commodities that are provided solely for entertainment.

Most people are responding to the shifting, diversified gaming environment by explicitly removing things that potentially alienate minorities that attend the event. The Penny Arcade Expo (PAX), has become a staple show for gamers to see the latest in independently developed games. It also has a strict “No Booth Babes” policy, which it clearly enforces:

Booth babes are defined as staff of ANY gender used by exhibitors to promote their products at PAX by using overtly sexual or suggestive methods. Partial nudity, the aggressive display of cleavage and the navel, and shorts/skirts higher than 4” above the knee are not allowed. If for any reason an exhibit and/or its contents are deemed objectionable to PAX management, the exhibitor will be asked to alter the attire of its staff.

To put it plainly: people attend games conferences like PAX and Gamescom to find camaraderie with fellow gamers and get to know what their favorite companies are planning next. PAX has reasoned — correctly, in my opinion — that overt objectification of women produces a message that potentially alienates people. All genders have a right to feel comfortable at events.

And that’s not even unpacking the general bullshit of hosting an Arabian-themed party, where caricatures of Middle Eastern people will parade on a yacht in Germany — a place that’s recently had a wave of Islamophobia and where 53 percent of Germans believe “Islam is not a part of Germany.” It’s hard to pin down the race demographics of gamers statistically, but it’s a fair assessment to assume that people from the Middle East will be a minority at Gamescom.

The idea that a San Francisco company, located in a place that is struggling to advance diversity in all areas, is downright stunning to me. But since Twitter just got reamed for hosting a frat party at their office, perhaps I should be less surprised.

As leaders in technology and gaming, companies should be thinking smarter about how they’re shutting out fans and perhaps even employees by being straight up ignorant. Whether it’s stateside or on an international forum, in public or in private, making dumb choices about race and gender reflects poorly on the brand and the spirit of the event.

I emailed Paymentwall to better understand their reasoning, but did not get a response. But I’m glad I’m not alone in this.

Just got my (unsolicited) invite for a tech party with “40 concubines” in Cologne. What in the hell. pic.twitter.com/HQexXf3DUH

My message to Paymentwall? Do better.

Read Next: eSports players will now have to take drug tests, just like other athletes