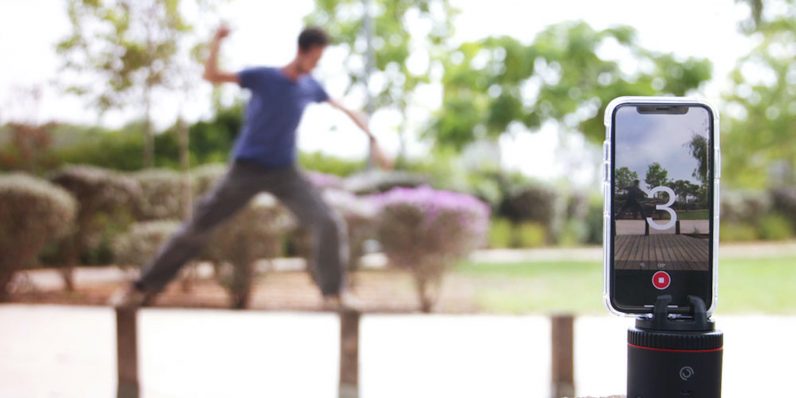 Maybe you’ve got a friend who’s obsessed with selfies and starring in their own videos. Or maybe…you’re the friend. Either way, there’s only so much anyone can shoot holding their phone at arm’s length. Inevitably, creativity will force these wannabe Spielbergs to come up with some alternatives to shooting everything on their own.

The Pivo Pod is sort of like hiring your own tiny cameraman to follow you around, ready to execute on all of your craziest photo and video ideas — and even offer a few wild notions of its own. Right now, the Pivo Pod is on sale at $50 off its regular price, down to just $109 from TNW Deals.

At just 2 inches high and weighing less than 5 ounces, the Pivo Pod is fully portable and ready for action anywhere. Just find your spot, lock your phone into the mount, sync to the app and the Pivo Pod uses smart technology to handle all your image and video capture duties.

With voice commands and the smart capture feature, you can take selfies or videos simply by snapping your fingers, or saying something like “cheese.” If you’re shooting video, the Pivo Pod has two super-convenient shooting modes: a smart tracking mode that will follow the subject on-screen, even when they move out of the frame; and the action tracking mode, which will lock in on a specific part of the action and stay with it through the video.

These trackers are particularly handy with live streaming. Powered by Restream, Pivo Pod works automatically with Facebook, Twitter, YouTube, Twitch, and 29 more platforms so you’ll get flawlessly smooth, in-focus video feeds without constantly worrying about whether you’re staying in frame.

Pivo Pod also comes with nine inventive create modes to help you create fun images and videos using a bevy of Pivo trickery. For example, the ManyMe mode lets you shoot up to 15 different versions of yourself and integrate them all together into one single photo or video; while the Motion Time Lapse mode lets you shoot dramatic time lapse video with a fluid 360-degree camera pan. Other modes feature quick camera moves or edits to go back and forth between two subjects, put moving video next to still images, shoot sweeping panoramas and more.

After raising more than $1.7 million in Indiegogo funding, you can now get a Pivo Pod at more than 30 percent off the retail price at just $109. You can also upgrade to the Starter Pack, which includes a second mount and a travel case for $129 (41 percent off); the Standard Pack, which adds a tripod for $179 (40 percent off); and the Full Pack, that also features a lightbox and turntable to shoot pro-grade product images for just $219 (35 percent off).

Read next: BlackBerry phones with keyboards are making a comeback in 2021