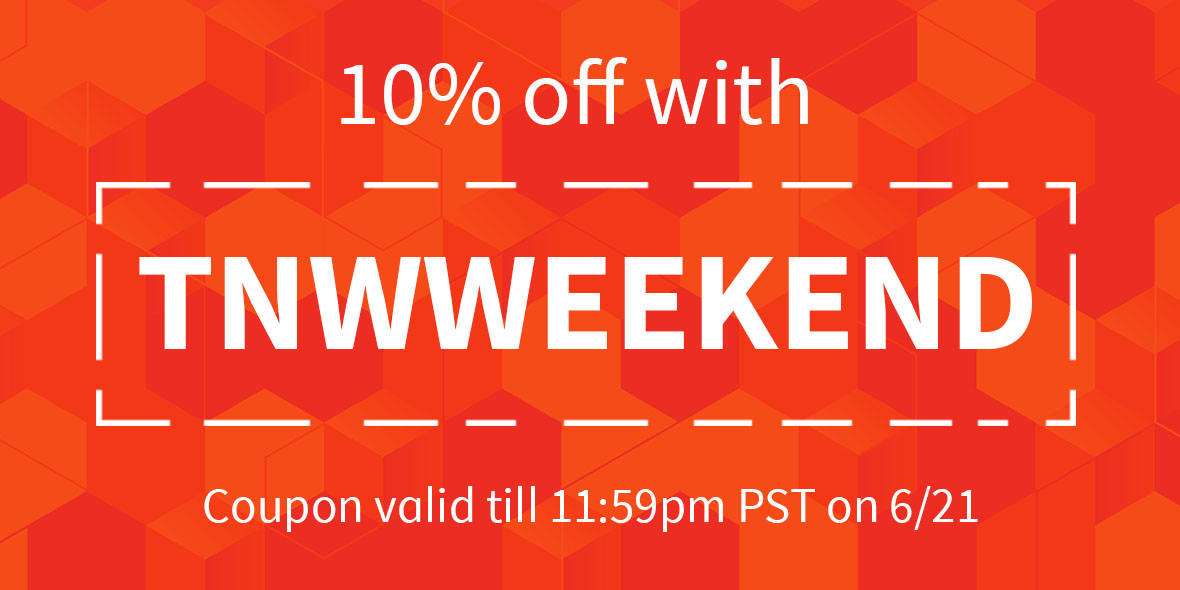 For this weekend only, you can get 10 percent off everything over at TNW Deals by entering code TNWWEEKEND. The coupon expires Sunday 21  June at 11:59pm PT.

To give you a taste of what you could be saving on, here are some of the week’s best deals.

Knowing how to code is both a life skill and a career opportunity, and this bundle of courses is designed to give you an all-round education.

It includes over 74 hours of content, teaching web design with HTML and CSS, web development with Javascript and PHP, programming with Ruby and Python, back-end development with Node.js and Heroku, and how to build prototypes at speed with several different apps. You can get the eight courses now for $59.

➤ The Complete 2015 Learn to Code Bundle

Using your phone while driving is a dangerous hobby unless you have some place good to put it. The ExoMount Touch has a suction cup that you can mount with one hand, and a head that swivels through 360 degrees to the ideal angle.

The suction cup is also incredibly grippy — it works on flat, curved, smooth, and textured surfaces — while the mount itself is compatible with virtually all smartphones. You can order it now for $19.99 with free shipping.

Pay what you want for the Mobile-First Developer’s Bundle

The demand for new apps still far outstrips the supply of clued-up developers. This bundle of ten courses teaches you the necessary skills to start building iOS, Android, and HTML5 apps, and you can pay whatever you want for it.

After taking the beginners course for each of the platforms, you can learn to build games with Unity 3D, convert a WordPress site into a native app, design for best user experience, and monetize your creations. In total it is 71 hours of content. Simply pay anything for the first two courses; beat the average to unlock the whole bundle.

Half Price on the Sound Kick Bluetooth Speaker

The Sound Kick is only 1.6 inches thick, but it sports stereo 2.3-watt drivers which produce great sound quality. This is further enhanced by UQ3 spatial technology and natural bass response, and the speaker can keep going on battery for seven hours of playtime.

Music is fed in wirelessly via Bluetooth, and the USB port at the back of the Sound Kick lets you charge your phone. You can currently pick it up at $49.99 with free shipping.

And remember, you can get an extra 10 percent off everything until midnight Sunday.