Facebook could be continuing to roll out its free VoIP calling beyond the US and to other platforms. We have heard that in the UK, Facebook users are getting an updated Facebook Messenger app for Android that allows calls to be made. This news comes days after the social network company updated its iOS app with the free calling service.

The UK is Facebook’s third country it has launched VoIP calling in through its Facebook Messenger app, following additions in the US and Canada. 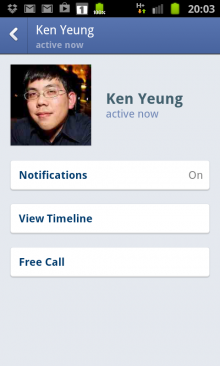 Users of Facebook’s Messenger app, which is separate from its main program, will find it has been updated so that a new option appears alongside the photo and camera buttons. In order to initiate a free call, users will need to select the person that they would like to chat with, tap the ‘i’ button on that individual’s profile and then press the Free Call button. The call will be placed over WiFi or using the data connection. If the recipient has Facebook Messenger installed on their device, they will receive a push notification that allows them to see who is calling them.

We tested out the service and noticed that this feature is limited right now to Facebook Messenger, not to the main Facebook app and we’re also hearing reports that not everyone who has the update is able to make free calls. When we tried to call some people using the Android app, we received an error message saying that it was unable to make calls.