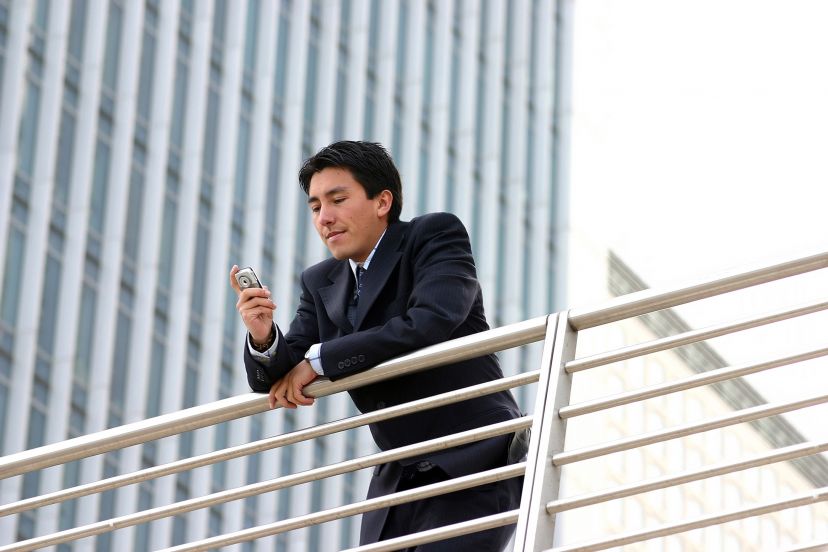 If you have ever attended Barcelona’s Mobile World Congress, you know how overwhelming the event can be. Between the latest gadget launches and its huge fair, your attention is constantly divided.

With so many novelties, it’s easy to forget about long-existing technologies and players that are quietly serving millions of people and thousands of companies behind the scenes. That would be a shame; after all, mobile isn’t only about 41m pixel phones.

With that in mind, we decided to go a little bit off track and interview an industry veteran, Andrew Bud. Formerly the CEO of mBlox, the B2B mobile interaction and payment company he founded in 1999, Bud is now its Chief Strategy Officer. He is also the Global Chair of MEF, the global trade association of the mobile media industry which he helped found in 2001. We talked to him about mobile trends, mBlox’s activities, Latin America and the future of mobile payments:

AH: If you had to summarize mBlox’s activities in one sentence, what would it be?

Andrew Bud: I’d say that mBlox is a very focused global company that enables other companies to interact and engage with consumers via the mobile channel.

AH: So this is mostly about SMS? What about the ubiquitous claim that SMS is dying?

AB: You hear a lot at MWC that SMS is dying, but it is very far from the truth – except maybe for consumer-to-consumer. But for B2C, SMS is alive and well; our SMS business even grew by 19% year-on-year between 2011 and 2012. Even in Europe, which is supposed to be a low-growth market hit by the financial crisis, it increased by 29%.

Historically, all that companies could do in terms of mobile communications with customers was to send text messages, bill them and request payments – and mBlox is one of the largest companies to manage these operations. In 2011, we handled 5 billion entreprise-to-consumer interactions globally.

AH: How does mBlox react to the fact that smartphones are more and more common?

AB: Smartphones mean that it isn’t only about push text messages anymore. This is why we launched a platform called ‘Engage‘, which take things one step further, with a platform that allows brands to send all types of content to their consumers, including rich media.

Context is a key element of this new product, and we help companies to respect the consumer – so we don’t push videos if you’re roaming, that your memory is full and that your battery is dying. We have much understanding of the consumer’s context, and we use it not to disrupt the consumer.

This has never been done before, and we are convinced that it will genuinely change the interaction with brands. We also pay a lot of attention to details. For example, we download the rich content in advance, so that it is already loaded when the customer asks for it.

AH: What kind of companies can be interested in these services and how can they use them?

AB: We hope it will appeal to media companies [defined broadly]. They can now interact and engage with their consumers in real-time, and go beyond the usual apps and mobile micro-sites.

With Engage, they can for example send teasers and trailers to their customers, but technology means that it is individualizable. Our clients can choose to personalize content; after all, it’s not broadcast – but it is entirely up to them and we don’t intervene. [Note to our readers: this has been a controversial issue and reportedly unethical uses of mBlox’s services resulted in legal disputes in the US, the UK and Australia.]

There is, however, a correct balance to find between over-targeting and irrelevance. Ultimately, our clients are the ones who will decide, but we give them the tools to make a relevant decision.

For instance, we have precise feedback on how customers react to the content they receive – if they delete it because it wasn’t relevant, or if they forward it to friends because they liked it. We give analytics to the brands, for them to make an informed decision.

AB: Smartphones spill out consumer knowledge in real-time. Our job is to get it to the cloud securely, and in a way that is respectful of the consumer – of its battery for instance, but also of its privacy. In practical terms, it means that we don’t share specific information with our consumer-facing clients – instead, we ask them to tell us in which circumstances they want to share a message, and we handle the execution for them. For instance, if they want to send you a specific message when you arrive at a certain location, they inform us in advance, and we don’t have to say when it happens to execute their order.

AH: Why do you think media companies could be interested in mBlox’s offer?

AB: For media companies, it is very important to monetize. This is why some are considering micro-charging. Yet, for cultural reasons, many don’t realize there’s already an industry that does exactly that. The operator-billed mobile entertainment is a $5b sector, and this model is transitioning to support the mobile digital media segment.

So for instance, this can interest newspapers available behind paywalls, e-book sellers, gaming companies charging for premium goods, streaming music services selling subscriptions… I can’t tell you exactly who are clients are, because most of them won’t allow us to tell we are working together – they want to be able to switch service providers without anyone noticing. We respect that – we are not a consumer-facing brand, and we know our industry still has to build trust.

AH: Most people don’t know that their operators don’t handle billing themselves; nor do we necessarily think of carrier billing as a way to monetize content.

AB: Carrier-billing is the key to content monetization on mobile devices. As Nokia’s CEO Stephen Elop pointed out at MWC, conversation rates are up to five times higher with carrier-billing than with credit card payments [Nokia’s own research shows that the purchase of apps increases by a factor of five if operator billing is available, Elop said].

As you may know, mBlox happens to be the largest carrier-billing operator in the world, [working with 800 operators in 180 countries]. We probably need to brag more about it, because it is about education; the content industry simply doesn’t think of carrier billing as a solution. They think they would have to close deals with individual operators, which would be a headache. They don’t realize that billing is actually managed by external companies – a highly competitive environment dominated by 5 global players, including mBlox. Anyone who wants to use carrier-billing can simply connect to mBlox.

AH: So when Facebook announced it is partnering with operators to offer carrier-billing on Facebook-based transactions, it is actually working with a company such as mBlox?

AB: Facebook is not saying which company or companies it is using – it could be mBlox, our competitors, or even several providers. Why? For instance to play them off against each other, or to reach global coverage.

AB: Carrier-billing is a great way of doing in-app purchases. it will be a very important part of the business and we will be launching our own solution, but we first need to make sure it will be trustworthy.

Our position means we are extremely aware of security challenges, and it is crucial for customers to trust their billing. So we won’t launch anything hastily – it has to be a durable consumer proposition, and we want to do it right.

Once we launch, we hope to reduce in-app purchases to a one-click operation, which is why we need to take security measures. Surprisingly, Apple has zero interest in engaging in carrier-billing. In our sense, it is a mistake, but it is also a symptom of the way they see operators.

AH: Finally, what is your perspective on the Latin American market?

AB: We are a global company, but Latin America is one of the areas we are the most excited about. This is also the case of MEF, which is working closely with Latin American operators to promote mobile content and commerce. This is especially true in Brazil, where it wrote the code of conduct that local operators have now endorsed.

As for mBlox, we have recently recruited our first staff in Sao Paulo. We also know that our network can support humanitarian needs, which led us to launch an initiative called InSTEDD [Innovative Support to Emergencies, Diseases and Disasters]. It is a partnership with NGOs, in which we power real-time support on mobile devices (which are now nearly universal).

After the interview, we also sent mBlox an email, asking the company to comment on the beta launch of WAC’s in-app billing platform (the Wholesale Applications Community is a consortium of mobile operators and manufacturers). Here’s the answer we received from mBlox’s CMO, Michele Turner:

“WAC is joining a long list of companies in the direct billing space, and they are not really different from the majority of the competitors in the market.  We know that we can differentiate in this market, build on our existing payments business and our relationships with the carriers globally, and leverage this with our suite of products to enable mobile marketing. For mBlox, payment is only a part of our service offering that is combined with a full set of services to create a complete mobile marketing service for the merchant.”

Could mBlox help brands engage with us on our mobile phones in relevant ways beyond push notifications? We certainly hope so, although content monetization could be even more interesting.

Read next: DeadSoci.al lets you feed your Facebook addiction long after you’re gone