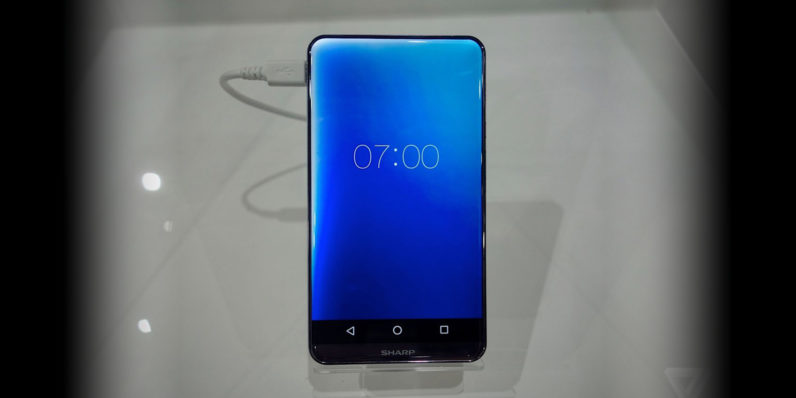 At first glances, Apple’s iPhone 7 is virtually identical to the previous model. You could be forgiven for wondering what’s next for smartphone design. This might give you an idea.

Sharp has recently shown off their latest display technology innovation, and it looks extremely cool. It’s called the Corner R, and this is what it looks like.

The rounded edges on the top of the screen are made possible by Sharp’s Free-Form Display technology that enables it to create screens in more shapes than just rectangles.

The result is a smartphone that feels like you’re holding only a screen in your hand — which seems ridiculously awesome. Unfortunately the Corner R currently only serves as a proof-of-concept, with no sign of it going on sale for consumers soon.

It’s not the first time Sharp has designed a virtually bezel-free smartphone. In 2014, the company launched the Aquos Crystal, which sported a 5-inch screen and a design reminiscent of the Corner R. The Android-powered device wasn’t successful in the mass market, which might have inspired the company to re-iterate on its design.

It’s still unclear how Sharp aims to solve the biggest problem most people have when the bezels are removed from a smartphone — the accidental contact your hand makes with the screen when holding the phone. This could potentially be fixed by implementing software that recognizes these false presses and ignores them.

If that’s taken care of, other manufactures might start buying Sharp’s screens and integrating them into their devices. Who knows, your next phone might end up looking as futuristic as the one above.

Read next: Microsoft sends out cryptic invite for October 26 event