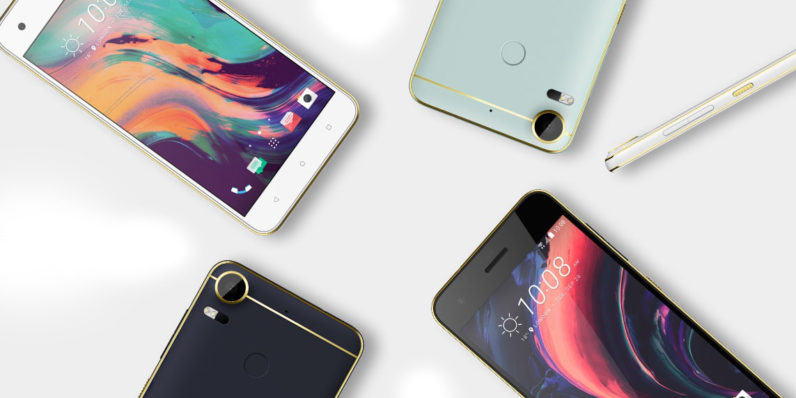 Following its teaser from earlier this month, HTC has revealed two new Desire 10 smartphones that promise to turn heads with their elegant design details.

The 5.5-inch, Android 6.0-based dual-SIM Desire 10 Pro and Desire 10 Lifestyle look the same on the outside, sporting a body modeled after the HTC 10, but with a matte finish embellished with metallic gold trim around the edges.

The Pro features a Full HD display and is powered by a Helio P10 octa-core processor that’s paired with your choice of 4GB RAM/64GB storage or 3GB RAM/32GB storage. There’s a microSD card for up to 2TB more room; you’ll also find a fingerprint sensor on the back and a 3,000mAh battery beneath it.

If you’re looking for a powerful camera, this is one to check out: The Pro has a 20-megapixel f/2.2 shooter on the rear with a wide 27.8mm focal length, and a 13-megapixel snapper on the front.

The Lifestyle variant packs less exciting specifications, like a 720p screen, a Qualcomm Snapdragon 400 1.6GHz processor either 2GB or 3GB of RAM with 32GB/64GB of storage and a 2700mAh battery. It also lacks a fingerprint reader.

It has a 13-megapixel rear camera and a 5-megapixel one on the front. But it’s not all downgrades with the Lifestyle: Unlike the Pro, this one supports 24-bit Hi-Res audio output, which HTC says makes for better-than-CD-quality sound.

HTC hasn’t yet announced pricing, but it did mention that the Lifestyle will begin shipping later this month and the Pro will go on sale in November. So it isn’t yet clear which phones this duo will go up against, but it’s safe to say that HTC’s new offerings certainly look more intriguing than most other mid-range handsets on the market today.

Read next: Microsoft unveils a new Nokia phone – and it looks so 2002