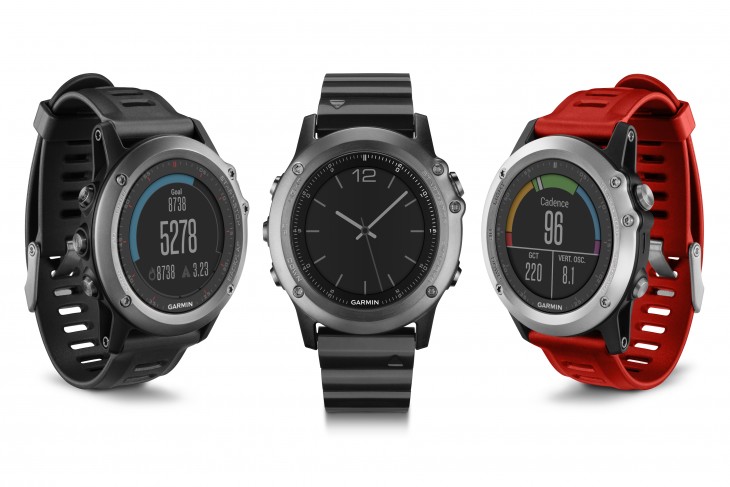 We told you what to expect from CES 2015 and it’s already playing out as we predicted – with a slew of wearables. Garmin’s the latest firm to fling its offerings our way with three new and very different smartwatches – the Fenix 3, Epix and Vivoactive.

The Fenix 3 is a “smart multi-sport GPS watch”. Translation: as well as built-in GPS and support for Russia’s GLONASS system, the watch will hook up with sensors like heart rate monitors. It will also count your steps and give you hourly reminders to get up and move. For more serious athletes, there’s recovery time calculation, VO2 max and a lot more.

The watch has a daylight-readable color display and supports Garmin’s new app platform Connect IQ. Available apps so far include a weather app from AccuWeather and a calendar from Tempo.

As well as running, the Fenix 3 will also report on biking, swimming, skiing and snowboarding. In the pool, it’ll track distance, pace, stroke and more. For skiers and snowboarders, it measures speed, distance, vertical drop and includes an automatic run counter. For everyday exercise you can set a customized daily step goal and there’s a sleep mode to monitor the quality of your slumber.

A feature called LiveTrack will allow Fenix 3 owners to take part in collaborative workouts by sending your run data to friends via Garmin Connect. The watch automatically sends updates via Wi-Fi or hooks up to your phone via Bluetooth to send them through the app. It also packs in a compass, barometer and altimeter which are all useful for hiking and other outdoor shenanigans.

The Fenix 3 will be available in the first quarter of this year in five versions: silver with a red band or grey with a black band ($499.99) or $549.99 with a wireless heart rate monitor strap. Rustle up $599.99 and you’ll get the high end Sapphire model with a stainless band and a domed sapphire lens.

The Epix is touted by Garmin as a “first-of-its-kind handsfree navigation device”. Essentially, it’s a moving map you can carry on your wrist displayed on a 1.4 inch touchscreen. The watch comes with a built-in world relief basemap and a one-year subscription to BirdsEye Satellite Imagery to keep it updated. There’s also 8GB of on-board storage.

Besides the mapping features, you’ll find a digital compass, altimeter and a barometer inside the Epix. Like the Fenix 3, the watch also supports sensors such as heart rate straps. It’s water resistant to 50-meters. Like the Fenix 3, the Epix uses the Connect IQ platform so you can add extra apps to the device and it’ll connect to your smartphone for notifications via Bluetooth.

The Epix will be available this quarter for $549.99 or a $599.99 if you want a more detailed topographic map pre-installed.

The Vivoactive is the most affordable and simple of the trio. Like the other models it will allow you to install apps from the Connect IQ platform. It has a color display, supports wireless sensors and has interchangeable bands. Its main benefits over the other two models are price – it’ll be $249.99 or $299.99 when it launches this quarter – and thinness. It’s definitely a more day-to-day device than its rugged compatriots.

Read next: The product we've been secretly working on: TNW Index